In Memory of Simone Weil 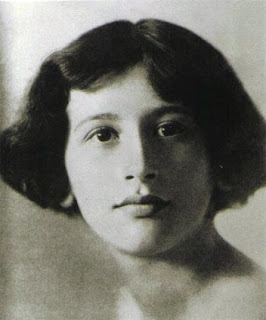 Simone Weil was an extraordinary figure, born a hundred years ago on February 3 1909, into a Jewish family in Paris. She was to become one sharpest stars of her generation, with a mind of great intensity and extraordinary clarity. She came top in the 1928 entrance examinations for the Ecole Normale Superieure, France’s elite school, ahead of Simone de Beauvoir and thirty male candidates, and this just one year after women were admitted.

Although attracted to left-wing causes of all kinds she gradually drifted towards Christian mysticism. She flirted with Catholicism but never quite took that final step because of the nature of her deepest beliefs. So far as she was concerned the best values of Western civilization had originated in ancient Greece, but had been subsequently perverted by the centralizing Roman Empire, which had a similar influence on the emerging Christian Church. She turned away from her own Jewish tradition because she hated what she perceived as the hateful and cruel God of the Old Testament. Although a social radical she saw Communism in the same oppressive terms, a substitution of party oppression for the oppression of capitalism. Her curiosity over religion, moreover, took her beyond Christianity into the mysteries of the Greeks and the Egyptians, and beyond to Hinduism and Buddhism.

Simone never found a final spiritual home, dying in London in August 1943, aged only 34. She had effectively starved herself to death, eating no more than what she believed was allowed in occupied France. Yes, she was great soul.
Posted by Anastasia F-B at 17:34