I'm so Proud to be a Saxon 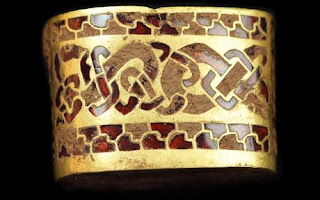 What was the most important story of last week? Was it the antics of Ahmadinejad or Gaddafi in New York? Was it the meeting of the Security Council? Was it the photo opportunity for the G20 in Pittsburgh? For some, perhaps, but not for me. For me there is only one answer: the discovery of the Anglo-Saxon artefacts in Staffordshire, right in the heart of Mercia, one of the most important-and elusive-of the seven kingdoms that once made up the Heptarchy.

This may very well turn out to be one of the most significant archaeological finds ever made in England, at least the equal to the discoveries made at Sutton Hoo in Suffolk seventy years ago, which cast some light into the English 'Dark Age'. It was made by one Terry Herbert using a second-hand metal detector he bought for £2.50 from a car boot sale, a discovery that would have made even Indiana Jones envy!

These wonderful artefacts, some six hundred and fifty items so far, many in gold and in silver, decorated with the most beautiful Saxon filigree, dates to the period between the late seventh to the early eighth centuries AD, a period of change and transition, a period when the old paganism was giving way to the advance of Christianity. Without exaggeration it has been likened to the discovery of a new Book of Kells or a Lindisfarne Gospel. Dr Kevin Lehy, an advisor to the Portable Antiquities scheme, said that the items represent the pinnacle of Anglo-Saxon craftsmanship;

Gold was more valuable at that time than it is now. So gold went to the best craftsmen. This was the best they could do. Cutting these garnets is incredibly difficult. They can't be cleaved. They have to be sawn, then polished. They even set them on gold foil so that they sparkle when the foil catches the light.

The hoard itself seems to be a collection of war trophies, buried for unknown reasons and never recovered. They're a great many sword hilts, confirming a passage in Beowulf that these were taken from dead enemies as tokens of victory in battle.

I would say that possibly the most important thing is the location of the find, right in the midst of what once was the Kingdom of Mercia. This is bound to reveal as much about this place once ruled over by Penda, the last of England's pagan kings, as Sutton Hoo did about the Kingdom of East Anglia. More than that it might tell us some more about the way in which Christianity was received and perceived by what were essentially warrior states.

The question that puzzles me is why and in what manner did an essentially pacifist cult make progress among such blood-thirsty peoples, not just in England but across the rest of pagan Europe. The answer surely has to be in the mode of presentation, in the way the early missionaries depicted Christ; less a New Testament Prince of Peace; more an Old Testament God of Battles. The clue here is one gold strip, possibly a cross fragment, inscribed in Latin by a passage from the Book of Numbers or Psalm 67, taken from the Vulgate, the Bible used by the Saxons;

Rise up O Lord, and may thy enemies be dispersed and those who hate thee be driven from thy face

So it would seem from this that the Saxon kings adopted Christianity for the political advantages it offered in much the same way that it was adopted earlier by the Roman Emperor Constantine. More precise dating is likely to reveal even deeper levels of interpretation.

The richness of the material, the weight of gold discovered, also says much more about the Anglo-Saxon states, about their wealth and their sophistication. The notion of a 'Dark Age' was always a myth; never more so in the light of the Staffordshire finds. It makes me proud to be a Saxon. :-)