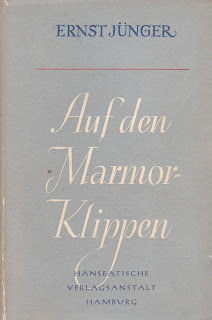 Printing of Ernst Jünger’s novel “On the Marble Cliffs” (Auf den Marmorklippen ) was stopped in 1940, though existing editions were not withdrawn, supposedly for its subliminal anti-Nazi message. To be perfectly honest I think the message of this little novel can be overstated, and Jünger himself never made any direct claim of the kind. Indeed, I would go so far as to say that the book reflects the character of the author in more ways than he might have cared to allow. It is detached, abstract and coldly intellectual; a work of aristocratic condescension; of a man who would never soil his hands in the dirty business of politics.

For each and every contemporary analogy, On the Marble Cliffs is balanced, and more than balanced, by forms of Teutonic mysticism; of Blut und Boden images and ideas that would just as easily have been appreciated and understood by the likes of Alfred Rosenberg. In the end the message is one of despair, of vindictive despair; that the humane values are not worth preserving. The book, for all of its lyricism and beauty, is cold and inert; the work of a man who merely watched while others acted. As much as I admire Jünger, and I do admire him, in the end his intellectual detachment comes dangerously close to an absence of true moral courage
Posted by Anastasia F-B at 16:24