The Rise of the Christian Witch 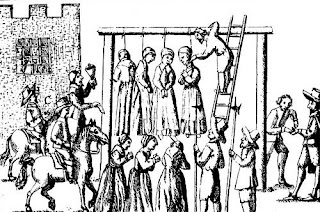 I was going through some old history journals last term, looking for material for a seminar paper, when I was sidetracked by a really interesting piece in History Today, volume 50, no 11, November 2000. It’s The Emergence of the Christian Witch by P. G. Maxwell-Stuart, an expert on the subject and the translator of my edition of the Malleus Maleficarum

Let me just highlight the main argument for future reference. Christianity, at the point that it began to acquire ever greater influence in the Roman world, faced two specific challenges: heretical deviations for orthodox teachings and the continuing belief in the power of magic among ordinary people. Indeed, converts were attracted into the church in part because of its own claim to magical practices. The early Christian fathers went that one step further, claiming a unique power. Indeed we have here, in essence, the cult of the saints, of the miraculous transformations achieved by preternatural intervention and the possession of ‘magical’ relics.

The problem remained how to convince a wavering pagan audience that the miracles of Christ and the Apostles were genuine, whereas those of people like Simon Magus or Apollonius of Tyre were fraudulent. This was tied up with increasingly pejorative interpretations of the old religions. Daimones, the old spiritual intermediaries between this world and the next, were reinterpreted as demons, all under the command of Satan. There was an interesting process at work because Christianity itself came dangerously close to Manichaeism, a particular persistent heresy, in which the world is divided between the light and the dark, a constant battle-ground between good and evil.

In the end all magic, all magic that was not Christian that is, was condemned as potentially dangerous and heretical. The Theodosian Code of 428AD identified what was considered to be maleficium or harmful magic. The Church itself continued to work towards a solution to the perceived problem in a series of councils held between the fourth and the eighth centuries. Amongst other things women were forbidden to keep watch at cemeteries, presumably in case they invoked the spirits of the dead.

Even so, there was no systematic view of the dangers of witchcraft as a whole, as opposed to an activity carried on by isolated individuals. Bit by bit, though, a new preoccupation with the significance e of heresy began to emerge. Paganism and the practitioners of magic were, by this measure, viewed as an organised group, answerable to and inspired by Satan himself.

In 1437 Pope Eugenius IV issued a bull addressed to all inquisitors, deploring the fact that so many were practicing various forms of magic, worshipping evil spirits and making pacts with them. Witchcraft was now tied up with more general forms of apostasy, with the first known depiction of a witch on a broomstick appearing in Martin le Franc’s Champion des Dames in 1440, were she is described as Vaudoise, a Waldensian heretic.

The various elements now began to coalesce: the practice of magic, intercourse with evil spirits, the attendance at the sabbat, the pact with Satan himself. The fifteenth century theologian Pedro Ciruelo summed it up thus:

Anyone who maintains a treaty of friendship with the Devil commits a very grave sin because he is breaking the first commandment and sinning against God, committing the crime of treason and lese majestie. His action is also contrary to the religious vow he made when he was baptized. He has become an apostate to Christ, and an idolater who renders service to the enemy of God, the Devil.

The Christian Witch had been born.
Posted by Anastasia F-B at 17:38