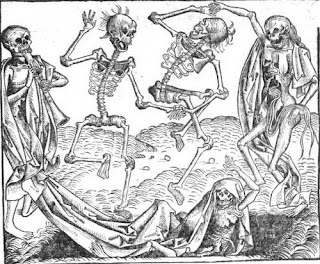 Death, death; O amiable lovely death!
Thou odouriferous stench! sound rottenness!
Arise forth from the couch of lasting night,
Thou hate and terror to prosperity,
And I will kiss thy detestable bones
And put my eyeballs in thy vaulty brows
And ring these fingers with thy household worms
And stop this gap of breath with fulsome dust
And be a carrion monster like thyself:
Come, grin on me, and I will think thou smilest
And buss thee as thy wife. Misery's love,
O, come to me!
King John, Act III, Scene 4

I had breakfast this morning pouring over a fascinating journal piece on Death and the Danse Macabre. There is a development in the perceptions of death, in the manner in which death related to life. In the Pagan World death is a presence, yes, but one quite different from that of Christian Middle Ages. The Romans, for example, accepted Homer’s identification of Death as the elder brother of Sleep, and the two are often depicted together as winged genii on funeral monuments. The Egyptians, according to Herodotus, were in the habit of introducing a sarcophagus to the festive table as a reminder of the fragility of life;

Behold this image of what you yourself will be; eat and drink therefore and be happy.

Plutarch later took up this notion, though in his account a skeleton was displayed. This was another custom adopted by the Romans, as can be seen in Petronius’ Dinner of Trimalchio, though here a jointed puppet takes the place of the skeleton.

The point to all this was not that death was to be feared: it was no more than the implacable will of the gods. In essence it was a spur aimed at redoubling carnal pleasures in the midst of a transitory existence. It was an invitation, if you like, to even greater sin.

Then, like the ghost of Banqo, Christianity arrived at the feast, with a dead and deadening hand. Now an eternity of suffering was the promised ‘reward’ of carnal sin. Death was thus reborn as a figure of terror, the gatekeeper to a world of even greater terrors. Thus was born the Danse Macabre.

Now the skeleton reappears in paintings and frescos across Europe, leading the living in a gruesome dance. The pageant begins in earnest in the fourteenth century, the age of the Black Death, and continues beyond. The skeleton takes the hand of all, from Emperor to Peasant, leading them onwards in an irresistible caper, often in procession, with the partners walking hand-in hand. Death is not at the end of life; he is there forcing his presence on every scene of pleasure, or of love, or of simple family intimacy. He takes at will; he takes the child from the mother, the wife from the husband; he separates lovers, forcing his own intimate embraces on the one or the other.

Fear of death, even in an age when the Danse Macabre has been consigned to the edges of consciousness, is arguably the most lasting Christian legacy 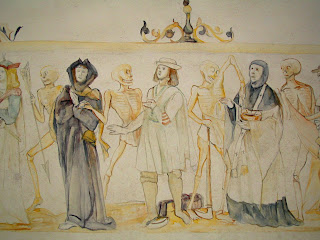