English Catholics and the Reformation 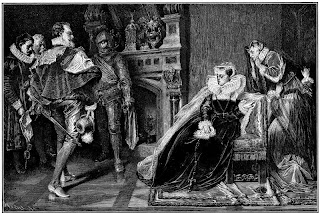 The problem for English Catholics after the break with Rome was in essence one of politics: the head of the Universal Church was now no more than a foreign potentate, and as their principle allegiance was to the crown, any lingering attachment to the secular authority of the Pope opened them to a possible charge of treason, especially after the excommunication of Elizabeth I.

Yet it should not be assumed that English Catholics always had an uncritical devotion to the Papacy. In the period before the onset of the English Reformation, when Sir Thomas More, later a Catholic martyr, was advising Henry VIII on the composition of his book, Defence of the Seven Sacraments, a polemic against Luther, he advised the King to tone down some of the arguments in favour of papal authority,

The Pope, as your Grace knoweth, is a Prince as you are. It may hereafter so fall out that your Grace and he may vary whereupon may grow breach of amity and war between you both. I think it best therefore that that place be amended, and his authority more slenderly touched.

I suppose the point here is that pontiffs like Alexander VI and Julius II, were almost entirely worldly figures, who impinged very little on Catholic practice and conscience. It was possible, in other words, to be a sincere Catholic yet distrustful of the Pope. So, those who in the end held to the 'Old Religion' may very well have done so for other reasons than loyalty to Rome.

The real break, the crisis of English Catholicism, if you like, came not in the 1530s but in 1570, with Pope Paul V's bull, Regnans in Excelsis. In forbiding English Catholics to obey Elizabeth and her laws, whether they paid heed or not, Paul effectively forced the government to treat them as a source of potential treason. The new class of 'Recusants', those who now refused to attend their local parish churches, were treated with increasing degrees of severity.

Even so, while there was some plotting against the throne, centering on Mary Queen of Scots, the Catholic alternative to Elizabeth, most of those who continued to adhere to the Old Religion, had little or no interest in treasonable actions; and regardless of papal instructions they effectively trimmed and compromised where they could, rendering unto Caesar what was due to Caesar. There were even Catholics who declared openly at the time of the Spanish Armada that if the enemy landed they would come to the defence of the Queen.

By the end of Elizabeth's reign, and into that of James I the pragmatic tendency in English Catholicism was well-established, expressed most particularly in the views of a new class of priests, known as the Appellants. The argument was now put forward that one could be loyal by both Pope and Crown, because the Pope had no claim on the political allegiance of Catholics. In this it is possible to see a 'national' reaction to the 'internationalism' of the Jesuits. In effect, the Pope's authority in civil matters was denied, just as he continued to be recognised as the supreme arbiter in matters of faith. It's worth emphasising that there was nothing new in this. Even rulers as orthodox as Philip II of Spain placed clear limits on the degree of papal interference allowed within their realms.

It was, in short, possible for Catholics to be loyal subjects of a heretical crown, no matter how much the Pope may have disliked this development. The English Civil Wars were to provide the best demonstration of the new dual tradition, with Catholics high among the Royalists.
Posted by Anastasia F-B at 17:11