In Memory of Agnes Sampson, the Wise Woman of Keith 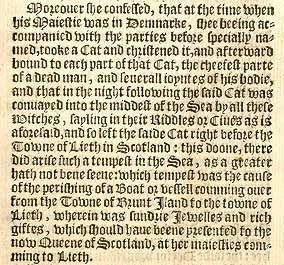 As I have already indicated, Agnes Sampson was one of the women implicated in the North Berwick Witch Trials. Also known as the Wise Wife of Keith, Agnes was a healer and a mid-wife, well known in her local community, the Barony of Keith in East Lothian. The records of the day detail the agonies she was forced to endure prior to confession;

This aforeaside Agnis Sampson which was the elder Witch, was taken and brought to Haliruid house before the Kings Maiestie and sundry other of the nobility of Scotland, where she was straitly examined, but all the perswasions which the Kings maiestie vsed to her with ye rest of his counsell, might not prouoke or induce her to confesse any thing, but stood stiffely in the deniall of all that was laide to her charge: whervpon they caused her to be conueied awaye to prison, there to receiue such torture as hath been lately prouided for witches in that country: and forasmuch as by due examination of witchcraft and witches in Scotland, it hath latelye beene found that the Deuill dooth generallye marke them with a priuie marke, by reason the Witches haue confessed themselues, that the Diuell dooth lick them with his tung in some priuy part of their bodie, before hee dooth receiue them to be his seruants, which marke commonly is giuen them vnder the haire in some part of their bodye, wherby it may not easily be found out or seene, although they be searched: and generally so long as the marke is not seene to those which search them, so long the parties that hath the marke will neuer confesse any thing. Therfore by special commaundement this Agnis Sampson had all her haire shauen of, in each parte of her bodie, and her head thrawen with a rope according to the custome of that Countrye, beeing a paine most greeuous, which she continued almost an hower, during which time she would not confesse any thing vntill the Diuels marke was found vpon her priuities, then she immediatlye confessed whatsoeuer was demaunded of her, and iustifying those persons aforesaid to be notorious witches.

Agnes Sampson was garrotted and burned to ashes on 28 January 1591. 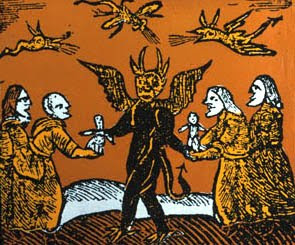