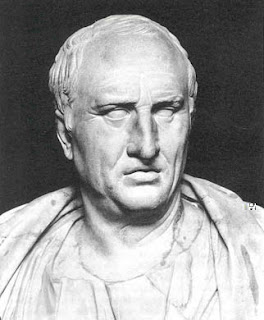 Is it possible for a man to behold these things, and yet imagine that certain solid and individual bodies move by their natural force and gravitation, and that a world so beautifully adorned was made by their fortuitous discourse? He who believes this may as well believe that if a great quantity of the one-and-twenty letters, composed either of gold or any other matter, were thrown upon the ground, they would fall in such a fashion as legibly to form the Annals of Ennius. I doubt whether fortune could make a single verse of them. How, therefore, can these people assert that the world was made by a fortuitous concourse of atoms, which have no colour, no quality-which the Greeks call 'poiotes', no sense? or there are inummerable worlds, some rising and some perishing, in every moment of time? But if the concourse of atoms can make a world, why not a porch, a temple, a house, a city, which are works of less labour and difficulty?

The beginnings, I think, of the Infinite Monkey theory. :)) 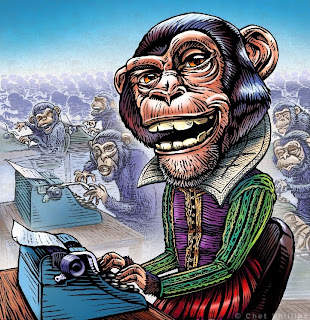