Juvenile Crime in Greece and Rome 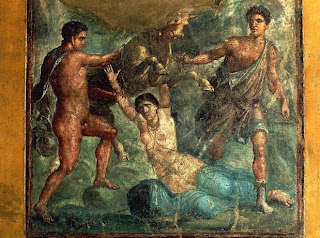 The Classical world never, of course, identified juvenile crime as a distinct issue, which makes the whole thing quite difficult to investigate, but it is possible to build up a limited and partial picture by sifting through the evidence. In Athens, for example, Demosthenes describes the case of a young man called Ariston, a victim of an unprovoked assault while walking home at night through the agora. He subsequently accused one Konon and his son Ktnesis, with whom he had served in the military. Ktnesis and his brother were seemingly in the habit of getting drunk at lunchtime, and then amusing themselves by pouring the contents of chamber pots over the heads of the personal slaves of their fellow soldiers!

The Athenians, and other Greek communities, had laws against 'the mistreatment of parents', which suggests that the practice was widespread. In Aristophanes' Clouds Pheidippides even argues that if fathers beat their sons then why should sons not be allowed to beat their fathers?

There is very little in the way of evidence to suggest that the casual public vandalism, a feature of contemporary youth crime, was a general problem, apart, that is, from one tantalising little detail concerning the actions of the Hermokopidal or 'Herm-mutilators' in 415BC. A Herm, from the God Hermes, was a stone pillar surmounted by a head. The only other feature was a prominent phallus. The Hermokopidal were those who went around removing these cocks! This crime, though, had a clear political purpose, intending to frustrate a planned Athenian expedition to Sicily. Hermes was the God of travelers, so the destruction of his statues would be taken as a bad omen. Sadly for Athens the message was not heeded.

In Sparta the 'hoodies' might be said to have been used in the service of the state. Youths between seventeen and nineteen were obliged to serve in an organisation known as the krupteia, which, among other things, was expected to terrorise the helots, thus ensuring that they were kept in place.

The Romans placed a particularly strict interpretation on notions of filial obedience, though again theatrical depictions suggest, perhaps, that all was not quite what it seems. Plautus makes use of the stereotype of the spendthrift young man in his plays. In Pseudolus there is the figure of Calidorus, who is prepared to cheat his father and mother in order to purchase the freedom of a prostitute called Phoenicium. When encouraged by the pimp Ballo to steal from his father he says that filial duty forbids this, to which Ballo responds "OK, then, just snuggle up to filial duty at night, instead of Phoenicium."

The nearest evidence we have to gang culture in the Roman world is with the circus factions, those who followed the four main chariot colours. These faction, most often made up of young men, were responsible on occasions for fairly serious public order incidents, including one notorious incident in Constantinople.

I should also mention that high-born Roman youths were more or less a law unto themselves, wandering the streets at night without restraint, beating up passers-by, assaulting women and smashing shops, Even the Emperor Nero was a member of one such gang in his youth. Perhaps even Saint Augustine himself was a hoodie, for in the Confessions he describes as a sixteen-year old how he stole some pears from a neighbours garden while he was part of a company of 'lewd young fellows';

And this we did, because we would go whither we should not...It was foul, yet I loved it, I loved to undo myself, I loved mine own fault, not that for which I committed the fault, but even the very fault itself...Alone, I would never have committed the theft...but even because when one cries: 'Let us go, let us do this or that', then 'tis a shame not to be shameless.