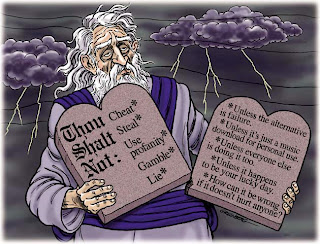 This is an answer I gave in a debate on the question of moral transcendence.

OK, I’m going to strip this right back, just to uncover some of the assumptions behind my argument that ethics and simple morality are based on transcendent values whereas laws are based on power. I’m not sidestepping your examples, though whether Genghis Khan led a ‘good life’ or a ‘moral life’ is clearly open to question, as, indeed, is that of Ghandi, inasmuch as he pursued political goals which, albeit unintended, had seriously adverse consequences.

Please note I said that ethics were transcendent, meaning they go beyond history and circumstances, not that they were based on a ‘higher law’, which is something quite different. Also there are values that are shared across cultures and traditions; all of the main religions, from Judaism to Buddhism, contain certain core principles governing inter-personal conduct.

Yes, there are societies where killing may indeed have been perceived as a virtue, just as there were societies where cannibalism and head-hunting were also ‘virtuous’, if that word has any meaning in this context. Let me make it clear that ethics, in the complex philosophical sense, and morality, in the simple sense of knowing right from wrong, are not ‘there’, so to speak, floating around; nor are they God-given. They emerge by a process of deduction and reason, beginning with the ancient Greeks. Socrates is speaking not just to Athenians; he is speaking to all people.

I cannot possibly explore all of the nuances of moral philosophy here; it would just be too horribly complex. Let me just say that my argument is based upon what is known as ‘moral universalism’; that the same principles apply across culture. In simple terms this is based on forms of self-reflection and understanding. On an intuitive level one is aware of the possibility of pain and suffering, and the need to avoid the things that cause pain and suffering, as an act of self-preservation. On a rational level this leads, on the basis of a good life, an awareness that others are also subject to pain and suffering, and the moral position is to avoid inflicting on them what one would wish to avoid having inflicted on oneself. Self-interest and reason coalesce into what I have alluded to as a transcendent value.

For instance Immanuel Kant, one of the architects of the argument I am advancing here, says that moral values-though ‘law’ is his preferred term-are binding on all, irrespective of their empirical circumstances or their individual preferences or proclivities. It is in the exercise of rationality that true moral thought lies. If this did not exist then the only basis for action would be immediate and sensuous impulses, and the only basis for morality one of self-gratification. That is to say, morality enables us to act in defiance of baser impulses, to reject the pursuit of power and glory as a justifiable end in itself, no matter what the consequences, as in the example of Genghis Khan. Morality is a free construct, freely arrived at; not dictated by God or any external impulse. Even Schopenhauer, who argues that Egoism is the guiding principle in all moral choice is forced to admit compassion as one of the ‘mysteries’, as he puts it, of ethics. Compassion reaches beyond egoism; compassion transcends egoism.

Look, I’m going to stop now, though there is so much more I could say. I do not want to test your patience too much, nor do I wish to develop a full-blown dissertation on the philosophy of ethics. Let me just say, returning to my earlier points, that it is possible to recognise the difference between what is moral and what is legal. If I had lived in Nazi Germany I know that my rational understanding, my ability to go beyond the immediacy of my circumstances, would have enabled me to see that the Nuremberg Laws were wrong and un-ethical. If I am a free, intellectually free and rational, then I will not be blinded by sophistry. Law is based on power; morality is based on truth.
Posted by Anastasia F-B at 16:24