Hoping for a Jihad 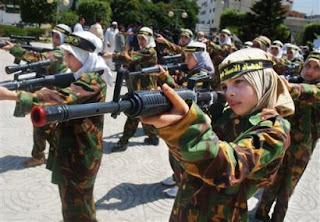 Some people in the west not only have an exaggerated fear of Islam but also a tendency to perceive it as a monolith. Thus perceived it is then painted with the colours of the most extreme elements. But Islam is no more monolithic than Christianity. Yes, there are extreme elements; yes, there is violence and again yes, there is bigotry. But these elements exist within Christianity, have always existed within Christianity. It's not just wrong-headed to equate Islam with extremism and terrorism it also serves the purpose of Al-Qaeda, all of those who would seek to present the same undifferentiated view of Christianity and the west that some Christians entertain of Islam and the east.

It would seem to be a self-evident truth that the principle victims of 'Muslim Terrorism' are Muslims themselves. This lesson has not been lost. It's certainly true that Muslim on Muslim violence tended to be overlooked when clerics felt that the religion itself was under attack from the west. But with the staged withdrawal from Iraq this supposed threat, amplified when Dubya referred to the 2003 invasion of that country as a 'crusade', no longer carries the same degree of force. Reporting from Egypt The Economist notes that the appeal of radical Islam there and throughout the Islamic world is in steady decline;

It is not just Osama bin Laden who has been holed up in remote exile. His ideology of global jihad has also retreated. Stung by public disgust with nihilist terror, and seeing the radicals' failure to consolidate tangible gains, some prominent preachers of endless jihad have repented their ways.

The converts to more moderate counsels number among them none other than Yusuf al-Qaradawi, a prominent Egyptian cleric who broadcasts across the Muslim world. Banned from entering the United States and Britain for his views on homosexuals and Jews, he recently denounced al-Qaeda's notion of jihad as "a mad declaration of war on the world that seeks to drive believers shackled towards paradise."

My mind always moves in a complex fashion, seeking patterns and significances were there are perhaps none. It's just that I read a piece recently on the Cathars and the thirteenth century Albigensian Crusade, tying it in with al-Qaradawi's comments. The Cathars were dualist heretics who, in their own fashion, declared war on a material world they believed to be controlled by Satan. It encourages me to think that al-Qaeda, denounced politically and theologically from within the Muslim world, might conceivably take on the form of a heresy, an Islamic heresy. In that event the 'crusaders' can move to one side; a jihad will finish the task with far greater and more lasting effect.
Posted by Anastasia F-B at 16:13