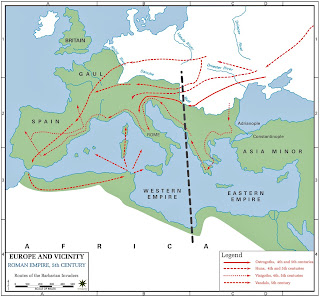 The crisis for both parts of the late Roman Empire really begins with the defeat and death of the Emperor Valens at the Battle of Adrianople in 378AD. Theodosius the Great managed to stabilise the situation for a time by co-opting the semi-independent barbarian tribes into the army as foederatii. As a strategy this was not new; the Romans had been in the practice of absorbing potentially useful auxiliaries for centuries. The problem was on this occasion there were simply too many, and the conventional Roman forces were too weak to deal with these new allies if the turned troublesome, as they did after the death of Theodosius in 395. The commander of the Visigoths, Alaric, declared himself a king and started to ravage the eastern provinces. This came at an especially bad time, for the empire was divided between two particularly weak rulers, Arcadius in the east and Honorius in the west, whose governments intrigued shamelessly, one against the other. Caring nothing for the wider welfare of the Empire, and anxious only to be rid of Alaric, the chamberlain Eutropius, chief minister to Arcadius, tempted Alaric to the west by granting him the top command of the province of Illyricum. Now another dangerous precedent had been set; for Alaric was both Barbarian king and Roman general, well placed to exploit the political divisions within the empire.

Eutropius' actions had, with deliberation, created huge problems for Stilicho, guardian of Honorius and a talented soldier, who was viewed in the east as a political enemy. To defend Italy Stilicho was forced to find troops wherever he could, abandoning Britain, and weakening the Rhine fortresses, which added still further to his problems by allowing new groups of barbarians to cross the river in force, entering Gaul virtually without opposition. They were never to be removed. Stilicho's enemies used this as an excuse to have him executed, causing thousands of troops loyal to him only to join up with Alaric, who entered Rome itself in 410AD.

The east learned quickly from the process of disintegration and collapse in the west by closing ranks among the leading political class, thus avoiding the destructive public struggles which were doing so much to weaken the remainder of the empire. Barbarian commanders in the eastern army were, in time to come, not allowed to become too powerful, usually by keeping them separate from a foederatii power base. In the west-what was left of the west-stability could only be achieved by granting ever greater concessions to barbarian strongmen, and by allowing ever larger foederatii 'kingdoms'.

In the east power was transmitted through established bureaucratic structures in church and state; in the west much depended on the transitory and uncertain authority of a single strongman, like Stilicho, Flavius Aetius and then Ricimer. By this means a serious gap grew up between the nominal authority of the Emperor, usually hidden away in Ravenna, and the real authority of a virtual military dictator. When the Attila and the Huns came there was nothing at all in the west to deter their progress, no great strategic barrier like Constantinople in the east. At the Battle of Chalons in 451, the last epic contest of the Roman west, one barbarian army faced another barbarian army; the barbarians won.

After the murder of Aetius the empire in the west was really no more that a series of dying fragments, with almost no tax base, where the fate of one shadowy emperor after another lay in the hands of Ricimer, before the last was sent packing by yet another ambitious commander in 476. In the east the great gate of Constantinople kept the Huns and others out of the rich and populated provinces of Anatolia and beyond, safe for as long as relations were good with the Persian Empire. The east was certainly saved by its shorter frontiers, by its greater wealth and by its strategically placed capital. But in the end perhaps the only thing that really mattered was that it had a far higher degree of statecraft; a reliance not on the strength of generals but the cunning of politicians
Posted by Anastasia F-B at 15:58