The Vindication of Brutus 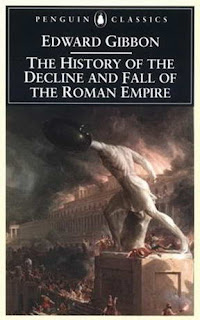 The Decline and Fall of the Roman Empire is as much political allegory as it is history. It is both a celebration and a warning; a celebration of the Imperial achievment and a warning over the sources of decay. For the man who walked through the ruined Forum, reflecting on the vanished glory of Rome, as his ears were filled with the chants of barefooted friars, was as much Marcus Brutus as he was Edward Gibbon. For Gibbon, in the guise of Brutus, the root cause of Roman decline was neither Christianity nor was it Barbarians: it was the willful the abdication of the old republican virtues of freedom and public service.

I consider this passage

If a man were called to fix a period in the history of the world, during which the condition of the human race was most happy and prosperous, he would, without hesitation, name that which elapsed from the death of Domitian to the accession of Commodus. The vast extent of the Roman empire was governed by absolute power, under the guidance of virtue and wisdom.

It is an age of tolerance, of domestic peace and of social harmony. But yet something is missing; and that something is what Gibbon refers to as the 'inestimable gift of freedom.' I am not talking here about 'democracy', which for Gibbon was a dangerous thing, but the concept of the 'balanced constitution'; of law, social responsibility, civic duty and good governance all working in harmony; the kind of constitution that emerged in 1689 after the Glorious Revolution in England.

It is, if you like, also the constitution of the old Roman Republic at its zenith, before it was destroyed by mob violence, class conflict and civil war. For Gibbon civilized life has to be based on an ideal combination of order and 'rational freedom', created by the Republic but lost by the Empire. The Empire, even the Empire of the Antonines, was based on despotism, and as such was "destitute of constitutional freedom." The Antonine state was, as he puts it, "an absolute monarchy disguised by the forms of the commonwealth." In other words, if the rule of the Antonines was benevolent it was benevolent by chance alone. It gave rise to Marcus Aurelius; but it could just as easily give way to Commodus.

The contrast Gibbon draws between Aurelius, the father, and Commodus, the son, was intended to highlight the fragility of the whole Antonine age. Benevolence had been created by chance, not by design, the fundamental truth that lies at the root of all despotism. The image of liberty, to put this another way, was not the same as true liberty. Gibbon admired Marcus Aurelius-just as he admired Frederick the Great-for his personal qualities; but imperial rule was still "absolute and without control." For Gibbon it is a mark of a truly good society that no single individual should be entrusted with absolute power-"Unless public liberty is protected by intrepid and vigilant guardians the authority of so formidable a magistrate will degenerate into despotism." After all, virtue and wisdom are not hereditary. Would not Brutus nod his head in agreement?

The other point connected to this-and herein lies the real explanation for the subsequent and relentless decline of the Roman world-is that benevolent despotism is demoralising and enervating. Under the Antonines the days of Cicero and the free nobility are long gone; private comfort has replaced civic responsibility: the Empire is set to decline because the 'will to freedom' has been lost-"as long as they [the nobility] were indulged in the enjoyment of their baths, their theatres and their villas, they cheerfully resigned the more dangerous cares of empire." More than this, in public felicity lay the latent causes of corruption-"The Roman monarchy, having attained its full strength and maturity, began to verge towards its decline." The causes are internal, and the Empire could never have fallen to Barbarians, or been undermined by the Christians, if it had not already been corrupted from within. The Romans may have retained personal valour, but they no longer "possessed that public courage, which is nourished by the love of independence."

Ultimately, Gibbon's view of the whole Roman world, no matter his residual sympathy, is one condescension and superiority; of celebration of his own time, of the age of virtue and progress. The Decline and Fall of the Roman Empire is Brutus' final vindication.
Posted by Anastasia F-B at 17:11