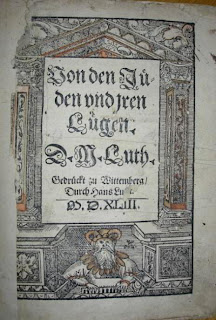 If you ever read Von den Jüden und ihren Lügen (On the Jews and their Lies) you may possibly feel that you have entered into a world inhabited by the likes of Julius Streicher: the language is vicious, the imagery unrestrained in its ugliness.

But look more closely; you will find none of the preoccupations with race and blood that were the key feature of the forms of anti-Semitism promoted by Hitler and the like. For Luther a Jew who converted was no longer a Jew. It's even more basic than that: for the salvation of the Jews was a precondition for the salvation of all. Luther's world was one of imminence; a world poised on the threshold of the Second Coming.

In anticipation of this the forces of Anti-Christ, whether they be Jews, Muslims or Catholics, were gathering, threatening to prevent the final victory of Christ. This was a danger for all, faithful and faithless alike. If the Jews would not convert they must "driven out like mad dogs, so that we do not partake in their abomniable blasphemy...and thus merit God's wrath and be damned with them." It was this fear that explains Luther's explosive sense of frustration at Jewish intransigence, and all of the venom and malice that erupted thereafter.

So, you will find him in the Nazi pantheon, admired by Hitler and the like, with his work displayed in a glass case at each and every Nuremberg Rally. At the time of the Kristalnacht, Martin Sasse, a Nazi and a Lutheran Bishop, was to express satisfaction that the pogrom had occured on Luther's birthday, and that the founder of his church deserved to be remembered as "the greatest anti-Semite of his time."

And yet Luther was a sixteenth century Christian, a Reformer, a man who set German against German in a way that did not sit comfortably with Nazi ideology and racial politics. Rassenpolitik, published in 1943, specifically targets Christianity as an enemy of the National Socialist world view. From this perspective the churches are guilty of building walls were none should exist; of dividing German from German; a place were the marriages between 'Aryans, Jews and Negroes are blessed'. The Reformation started as a 'German Revolution', but degenerated into a battle over dogma, where "Luther finally bound the conscience to the Jewish teachings of the Bible." And thus the real distance is displayed in all its clarity.
Posted by Anastasia F-B at 16:55