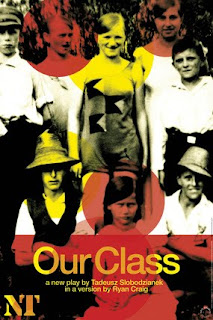 I saw Our Class on Friday, a new play by Tadeusz Slobodzianek, presently being performed at the National Theatre here in London and running until January.

Set in Poland and following the passage through time of a group of school chums, Catholic and Jewish, Our Class is a ‘Holocaust play’ but not in the form that one might imagine. For it tells a story that many Poles would rather forget, did forget for many years: that Nazi anti-Semitism harmonised with an older tradition of hatred, one with deep roots in their country. By ever tightening circles of fear and hate the story moves through war and occupation to the Jedwabne Pogrom of July 1941, in which Jews were massacred not by Germans but by their fellow Poles.

Paradoxically this is a story that could only really be told after the demise of Communism and the emergence of the new Poland. Previously it raised all sorts of complicated issues: that of Polish people towards the Jewish community in their midst, and that of the post-war Communist authorities towards the political significance of the Holocaust.

The official investigation into the Holocaust in Poland began with the setting up of a commission to gather evidence of war crimes just after the conclusion of the war, which included the Jewish Historical Institute (JHI), a body of independent historians. This was a time when Poland was not yet fully controlled by the Communists, so some degree of openness and objectivity was still possible.

Things changed from 1948 onwards. In 1950 the JHI was placed under the control of the Ministry of Education, with all inquiry not approved of by the Party coming to an end. The new line was to stress the passive response of the Jews to the Nazis, while minimising Polish anti-Semitism and collaboration. It was said that the western emphasis on the persecution of the Jews had only obscured the persecution of the Poles. The official attitude towards the Jews was further modified by the emergence of the state of Israel. Now anti-Semitism was replaced by anti-Zionism; but both still drew on the traditional stereotype of the greedy, manipulative and exploitative Jew.

The political struggles of the 1960s saw the emergence of even more strident forms of anti-Jewish nationalism, most associated with the group around Mieczyslaw Moczar, notorious both for his xenophobia and his anti-Semitism. After the victory of Israel in the Six Day War of 1967 the position for Poland's dwindling Jewish minority became steadily worse, with all sorts of people being attacked for 'Zionist sympathies', whether they had them or not. The whole programme embraced Holocaust history. Any and every attempt to define this as a uniquely Jewish event was denounced as 'part of a chauvinist Zionist propaganda plot to justify the existence of Israel and turn the world against Communism.' It was, so it was said, a new 'Jewish world conspiracy.' In 1968 all the records of the JHI were taken over by the government. Subsequent to this a conference was held to 'rebut the slanderous campaign of lies in the West...especially with reference to the accusations about the alleged participation of Poles in the annihilation of the Jewish population.' By now the JHI had all but ceased to exist.

The fall of Communism has been accompanied by a new openness; a willingness, at least by some, to confront uncomfortable truths, including the truth of Jedwabne and other matters touching on the relations between the Jewish and Catholic communities during the Holocaust.

The play itself is a remarkable if not entirely comfortable experience. It’s long, three hours long, so it requires stamina on more level than one. The ensemble, only ten strong, are utterly convincing as they move through the childhood and dreams of the 1920s to the adulthood and nightmares of the 1940s. All the performances are memorable but for me the outstanding one was that of Sinead Matthews as Dora, who dreamt of being a film star only to end by being burned alive with her baby and some 1600 other people in a barn. It’s stark; there are no visual distractions; much of the horror is conveyed by mime. More than anything the play is effective as a kind of accusation, delivered from the past to the present.

There aspects of the past that I think we would all wish to forget, not just the Poles. But remembrance is, after all, a human duty.
Posted by Anastasia F-B at 17:04