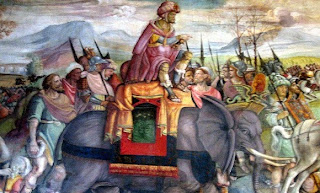 No, not that Hannibal; the real one!

I must say that I have never entirely understood Hannibal. I would have said, like so many soldiers, that he was a brilliant tactician but a poor politician, except his talents as a politician, though not as high as his talents as a soldier, were still of a comendable order. How otherwise is one to explain his appeal to Rome's Italian allies, his announcment that his quarrel was not with them, but with the power to which they had all been subject.

I also do not think it quite true, as Maharbal is alleged to have said after the Battle of Cannae, that Hannibal knew how to gain a victory but not how to use it. The real issue is that Hannibal the soldier and Hannibal the politician were at variance with one another; he had the power and the means to destroy Rome by a rapid follow-up to Cannae, but his war was still one of limited aims: Rome was to be humbled and weakened, not eliminated. The city, in other words, was to be left with a role but without a confederacy. It might have worked if he had been able to detach the Greek cities of the south from their Roman alliance; but for them his 'barbarian' army was perceived as the greater threat. The moment passed, and by 214BC the Roman fleet was able to prevent supplies and reinforcements reaching Italy. In effect, Hannibal the politican had robbed Hannibal the soldier of the full rewards of victory.
Posted by Anastasia F-B at 17:10