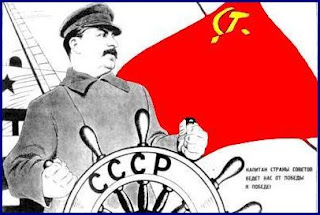 The Bolsheviks had always been great admirers of the 'cult of Ford' and all that it embraced, including the time and motion studies of Frederick Winslow Taylor. The enthusiasm for the 'high priests of capitalism' became evem nore intense after Stalin introduced the First Five Year Plan in 1928. But, of course, the Soviets had to go yet one step further in the pursuit of maximum efficiency.

Although the working day had been reduced from eight to seven hours, what the state gave with one hand it took away with the other. In 1929, not long after the introduction of the reduced working day, all factories were ordered to adopt a three-shift system, allowing them to work day and night. This meant that many had to work at the most undesirable hours. No sooner had this policy been announced than one Yuri Larin devised a scheme for even greater efficiency. All factories were still closed on Sundays. Why not, Larin reasoned, abolish the wasted day by introducing the continuous working week?

When this proposal was first raised at the Congress of Soviets in May 1929 it attracted little support. It was only when Stalin took an interest that matters changed. By June the press was full of articles praising the idea; and in August the Council of People's Commissars decreed that it should be brought into immediate effect.

Simple enough in theory, it proved very awkward in practice. Complex shift patterns had to be introduced, and the number of holidays allowed reduced. Workers in each establishment were divided into five groups, distinguished by a colour code, which appeared on the new Uninterrupted Work Week calendars. The scheme was also used to further the regime's atheist policy, because the bulk of the working population were no longer free to attend church on Sundays. The most serious impact, of course, was on family life; but the state argued that the collective good had to come first. This was the Ideal, and like most Ideals, it was universally hated by those that it effected most-the working population. Husbands and wives rarely had rest days that coincided.

This grass-roots resentment could be, and was, ignored. Not so the deleterious effect on production rates. With complicated rotas, work teams found themselves performing different tasks on successive weeks. Machines were no longer in the continuous keeping of those who knew them best, with the result that breakages became increasingly common, often put down to 'political sabotage.'

Bit by bit the scheme lost favour. In June 1931 Stalin gave a speech, criticising the 'depersonalised labour' brought about by the hasty introduction of the continuous week. This was the beginning of the end. In November of that same year the government ordered the reintroduction of the six-day week, although Sunday remained a working day. But even this last vestage of the 'continuous week' was not to last; and by 1940 Sunday had been restored as the universal day of rest. God is not so easily defeated!
Posted by Anastasia F-B at 17:29