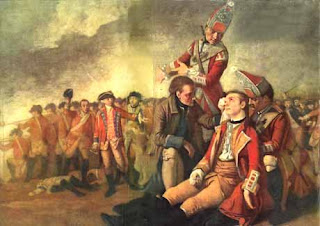 History is always made by those who are prepared to hazard the bold moves, the risk takers of all kinds. In the annals of British military history there was perhaps none bolder than General James Wolfe, the two-hundredth and fiftieth anniversary of whose death and transfiguration fell earlier this month. The attack on the French stronghold of Quebec, after a totally unconventional amphibious assault, opposed by all of his colonels, was an achievement of strategic brilliance. It brought an end to Anglo-French imperial rivalry in the Americas, with an outright victory for the British. There was, however, an irony in this victory: for in being rid of the French, of fear of the French and their murderous Indian allies, the Americans no longer needed the British. Canada may have begun, but America was lost.

Even so, Wolfe’s victory was not fleeting. He was indirectly one of the founding fathers of the United States, a contention that some might dispute. But what is beyond dispute is the simple fact that Wolfe, by his victory on the Plains of Abraham, established a lasting Anglo-Saxon hegemony in North America. Yes, there have been disputes between England and America since, at one stage breaking into outright war, but a common ancestry, a common language, shared commercial interests and shared legal values have meant that genuine community of inertest developed between the two nations. In the late 1890s when Bismarck was asked in an interview what he thought would have the greatest impact on the course of the coming century he replied without hesitation, “The fact that North America speaks English.”