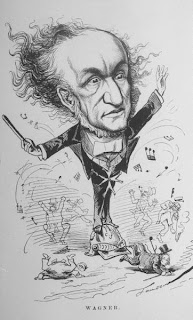 Richard Wagner may have read Schopenhauer but he sure as hell did not understand Schopenhauer! Perhaps apes also read the great pessimist with as little understanding as they bring to Nietzsche?!

Anyway, Wagner, by his own account, read The World as Will and Representation several times, impressed by the idea of music as the striving of the will. But he was equally impressed by the notion of the denial of will. His enthusiasm was expressed in a letter to Franz Liszt: "I have...found a sedative which has finally helped me to sleep at night; it is the sincere and heartfelt yearning for death; total unconsciousness, complete annihilation, the end of all dreams-the only ultimate redemption."