Bloody Mary and the Futility of Burning 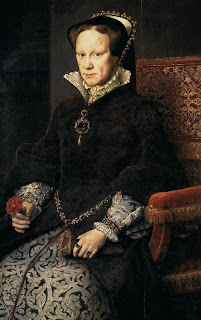 There is an understandable tendency, I suppose, to read history backwards; to assume, in other words, a given set of outcomes; that what is what had to be. But when Mary Tudor came to the throne in 1553 Protestantism was still a fairly recent graft on to the English tree, and not all that popular, if the Pilgrimage of Grace can be considered as an accurate measure of the national mood. The ease with which Mary swept aside the challenge of Lady Jane Grey and her tiny Protestant party provides additional confirmation, if any such is needed, that there were no real fears of a Catholic restoration.

So Mary was very well placed at the outset of her reign to return England permanently to the Roman faith. Most people had little in the way of deep emotional attachment to the reformed religion, and were quite happy to observe the outward and conventional forms of belief. Even at their height the Marian persecutions only embraced a tiny proportion of the population. But the persecutions and the burnings, as is the way with these things, were completely counter-productive: they did more to foster anti-Catholicism than any Protestant propaganda.

As early as October 1553, Simon Renard, the Ambassador of the Holy Roman Empire, wrote that "It is easy to foresee that there will be difficulty in repressing heretics without causing scandal...The thing most to be feared is that the Queen may be moved by her religious ardour and zeal to attempt to set matters right at one stroke, for this cannot be done in the case of a people that has drunk so deep in error."

The subsequent burnings were to confirm all of his fears, as the dominant mood among the thousands who witnessed these auto-da-fe seems, for the most part, to have been one of sympathy and anger. Foxe's later accounts of the martyrdoms is undeniably biased; but it finds support in contemporary accounts by Catholic observers. Giovanni Micheli, the Venetian ambassador, who witnessed the burning of Rowland Taylor, wrote that the people were so angry that they planned to set fire to the houses "and raise a great tumult; not merely to release the Doctor from the stake, but to punish and revenge themselves on those whose religion was opposed to their own."

When he left England in 1557 he noted that "the public mind is more than ever irritated."

It wasn't just ordinary people who were repelled by the burnings. A reading of the Acts of the Privy Council uncovers many examples of local officials less than enthusiastic in the enforcement of the heresy laws. Action had to be taken against jailers who allowed Protestant prisoners to escape. In 1557 letters were sent out to sheriffs and bailiffs throughout the Home Counties, asking why sentences for heresy were not being carried out. Sir John Butler, the sheriff of Essex, was fined £10 for allowing his deputy to reprieve a woman sentenced to burning. Some, like Thomas Causton, were inspired by example-"Ye say that the Bishops lately burnt were heretics. I pray God make me such a heretic as they were."

Even some of those close to the Queen could see that things were going badly. Stephen Gardiner, the bishop of Winchester, had believed that if an example was made of a few of the leading Protestants that the rest would be frightened into conformity. When this failed to happen he ended burnings in his own diocese. Those who were frightened into conformity elsewhere observed only the outward forms of Catholic belief, as Micheli and others made note, which explains why the Marian counter-reformation was so easily and quickly put into reverse when Elizabeth came to the throne.

But there is also another factor to be drawn in here, the one thing above all others that explain why Mary's policy was so counter-productive. Persecution had worked elsewhere in Europe, particularly in Catholic Austria, in reducing the appeal of heresy; but only when force was accompanied by persuasion; by an active evangelical mission. In England this simply did not happen, or at least not to any significant degree. Quite simply the church lacked the means. All of the land and wealth lost during the Dissolution of the Monasteries was not returned; for to do so would have been a challenge to the interests and power of the nobility; and that, even for Mary, was a step too far. Reginald Pole had pressed for this, with no success; for the beneficiaries of the redistribution had included many Catholics, as well as Protestants. There was no money, so there was no mission; only the terror-and the example-of the burnings.

Mary lacked money; she also lacked time. Her early death from cancer in 1558 ended the counter-reformation. More than that, the failure of Mary's reign, the examples and the lessons it provided, were to be the foundations for the Elizabethan Reformation, more complete and lasting in every way. 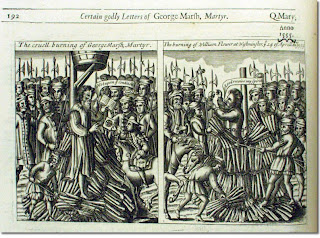