Making a Statement: Fashion in the Ancient World 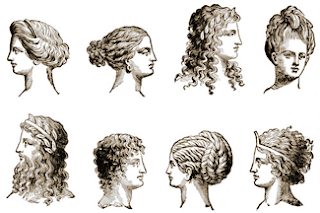 There is a lovely passage from Plutarch about Alcibiades, the Athenian politician, worth quoting at length;

All his statecraft and eloquence and lofty purpose and cleverness was attended with great luxuriousness of life, with wanton drunkenness and lewdness, and with effeminacy in dress-he would trail long purple robes through the agora...He also had a golden shield made for himself and decorated not with ancestral insignia but with the likeness of Eros wielding a thunderbolt. The reputable men of the city looked on all these things with loathing and indignation, and they feared his contemptuous and lawless spirit.

Now, there's a guy who really wanted to stand out!

Obviously Alcibiades is making an extravagant personal statement, the mirror, perhaps, of his extravagant political style. But there were also group trends that excited comment among the more conservative Athenians. Here the most prominent were the young men who copied the styles of Sparta, with long beards and short cloaks, taken as a sign of their estrangement from the city's democratic culture. It was Aristophanes who coined the term 'Laconomania' for this phenomenon, describing its adherents in The Birds as 'long-haired, hungry, dirty and acting like Socrates by carrying the Spartan cane.'

Changing trends in fashion, political or otherwise, were really nothing new in Athens. Before the outbreak of the Persian Wars men who started to adopt more elaborate hairstyles. Thucydides describes one of these, in which the hair was tied behind the head in a knot called a chignon, and then fastened with a clasp of golden grasshoppers. This and other stylistic changes were influenced by the fashions of the Persian east. Not surprisingly all such affectations were abandoned as 'effeminate' in the wake of the ensuing wars.

The Greeks were no different from other cultures in following the trends set by political icons. Just as the toothbrush moustache became commonplace in the Third Reich, so the fashion-conscious Greek male followed the clean-shaven look of Alexander the Great. Indeed, Alexander was so significant here that he set the trend in the whole of the Greek world for at least half a millennium after his death. I think this was probably due to the fact that he was the first ruler to recognise the link between personal image and propaganda, restricting and controlling artistic representations of himself with great care, in sculpture, in paintings and on coins.

The Roman sense of fashion was even more refined than that of the Greeks. While the Greek made distinctions in dress primarily on the basis of gender, the Romans introduced a dress code which allowed determination's to be made of an individuals status and function. Concepts of 'correct dress', and proper grooming, lay at the very centre of Roman culture. Both dress and manner of speech were thought to reflect a person's moral character. Seneca, tutor to the Emperor Nero, writes:

The truly great man speaks informally and easily; whatever he says, he speaks with more assurance than pains. You are familiar with the carefully coiffed young men, with their gleaming beards and hair-everything from a box; you can never hope for anything strong or solid from them.

When Cicero wanted to be particularly cutting about public figures he held in distaste he focused on perceived idiosyncrasies of style. He was at his most acidy in his descriptions of Gabinus and Piso, the Consuls for the year 58BC. He describes Gabinus 'dripping with unguents', with his hair artificially waved. And as for Piso;

Great Gods! How repulsively he walked, how fierce, how terrible to look at! You would say that you saw one of those bearded men of old, a very exemplum of the ancient regime, an image of antiquity, a pillar of the state. He was clothed harshly in our common purple, which was nearly black, with his hair so shaggy that at Capua, where he held the office of a duumvir in order to add another title to the wax portrait image he would leave for posterity, he looked as if he were ready to carry off the street of perfumers and hairdressers on his locks.

It was always dangerous for a Roman in public life to depart from the strict standards of 'Republican virtue', for this was invariably taken as a sign of frivolity or effeminacy. But the fact that such criticism appears regularly over prolonged periods of time shows that there were many prepared to challenge convention by making small personal fashion statements. Designs themselves were fairly consistent, so innovations in material and colouring were the most obvious ways of individualising dress or capturing a popular trend. Pliny noted this, criticising such innovations as 'sheer vanity.'

Women, too, were as fashion conscious as the men, with hairstyle being the main way of expressing personal preferences. Ovid noted "It is impossible to enumerate all the different styles: each day adds more adornments." This was another trend that unsettled the censorious Seneca, as he makes clear in his tribute to his mother, Helvia;

You-unlike so many others-never succumbed to immorality, the worst evil of the century; jewels and pearls did not bend you...The bad example of lesser women-dangerous even for the virtuous-did not lead you to stray from the old-fashioned, strict upbringing you received at home...You never polluted yourself with makeup, and never wore a dress that covered about as much on as it did off. Your only ornament, the kind of beauty that time does not tarnish, is the great honour of modesty.

So, yes, there was fashion, even if Seneca disapproved!