The Foundations of English Racism 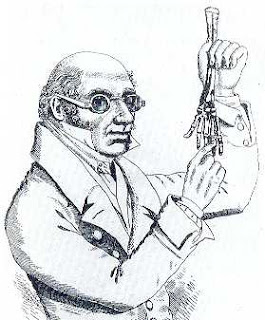 Continental-style racial theories made their way into England from about 1840 onwards. One of the earliest exponents was none other than Thomas Arnold, the famous headmaster of Rugby School, and a leading historian. He advanced a universal theory of world history, in which he assigned a special role to the Aryans, specifically the Germanic races, which included, of course, the Anglo-Saxons. Race theories in general made their way into the oddest corners of British intellectual life. Consider the following;

You never observe a great intellectual movement in Europe in which the Jews do not greatly participate. The first Jesuits were Jews; that mysterious Russian diplomacy which so alarms Western Europe is organised and principally carried on by Jews; that mighty revolution which is at this moment preparing in Germany, and which will be, in fact, a second and greater Reformation, and of which so little is as yet known in England, is entirely developing under the auspices of Jews, who almost monopolise the professional chairs in Germany...

Who wrote that? Why, none other than Benjamin Disraeli in his 1844 novel Coningsby, and himself of Jewish origin.. His view, for all its fancy, was benign: it was, nevertheless, to find a malign echo in the coming development of European anti-Semitism.

But we have to go further north, to Edinburgh, in fact, to discover the man who has been described as the "real founder of British racism." His name was Robert Knox, a leading anatomist and an anthropologist, best known now as the chief client of the Edinburgh body-snatchers, Burke and Hare. His published work included The Races of Men, in which he described the Jewish race as 'sterile parasites.'

For Knox, race was the key to all human activity-"...that the race in human affairs is everything, is simply a fact, the most comprehensive, which philosophy has ever announced. Race is everything: literature, science, art-in a word, civilization depends on it." The highest races were the Germans, the Saxons, and the Celts; the lowest were Black Africans. Though now Knox's work is almost completely forgotten, it was widely admired at the time, by Charles Darwin, among others
Posted by Anastasia F-B at 17:39