Nobody expects the Chilcot Inquisition! 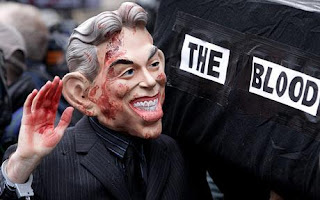 I like old comedies, shows like Monty Python’s Flying Circus, full of anarchic humour. Watching Blair’s performance before the Chilcot Inquiry on the Iraq War reminded me somewhat of the Spanish Inquisition scene, the one where the old lady is threatened with such dire tortures as the cushions and the comfy chair!

It’s just so frustrating, that panel of old dogs with gummy jaws, whose toughest questions have all the force of the cushions and the comfy chair. Yes, we are repeatedly reminded by the chairman that the object of the inquiry is to get at the truth not to apportion blame. But how does one get to the truth without asking demanding questions; how does one get to the truth, in other words, without detailed cross-examination?

There he was, Blair, a perfect target, not at all looking like a former prime minister of this country, rather a shifty prisoner in the dock, his hands shaking according to witnesses. But then he got into his stride; then he produced what was obviously a rehearsed strategy. It was the same gung-ho approach as Alistair Campbell; defend everything and apologise for nothing. Yes, there he was, he might as well have sung Non, je ne regrette rien.

I so wanted to be there also; I so wanted to conduct the kind of cross-examination of which the Chilcot worthies are incapable. So, former Prime Minister Blair, 9/11 changed the ‘calculus of risk’, to use your expression. Tell me, why was it necessary to attack a secular state actively hostile to terrorist movements like al-Qaeda? Did you not consider the possibility that removal of Saddam would immeasurably destabilise the whole region to the benefit of Iran? Were you not advised of the logistical and practical difficulties of invading and occupying a country like Iraq by a panel of academic experts in November 2002? Did you not then ignore that advice, saying that Saddam was ‘evil’? Would it be true to suggest that the invasion was based on a dubious value judgement, not on solid intelligence and practical politics?

Oh, I could go on like this. How I would loved to have tackled him on the bizarre logic of the March 2010 question; that weapons not there in March 2003 would have multiplied, nothing begetting nothing! The truth is simply told; the First Gulf War was absolutely necessary; the Second was a Bush war, unfinished family business into which a man, never fit to be Prime Minister, drew this country on the basis of half-truths, outright lies, shady deals and dubious manipulation. He misled parliament; he misled the nation. Hans Blix, the former UN weapons inspector, has compared Blair and Bush as latter-day ‘witch hunters’, only interested in such evidence as ‘proved’ their case.

The same day that Blair gave his evidence by some ironic coincidence BBC screened a repeat of Andrew Marr’s History of Modern Britain, the episode dealing with Suez. This was a foreign policy disaster that effectively destroyed Anthony Eden, a bear of very little judgement. Still, for all his faults, he had qualities of simple integrity and decency, entirely alien to Tony Blair. I’m convinced that future historians will judge Iraq to be a far greater mistake than Suez. Meanwhile, the ‘calculus of risk’ is immeasurably greater now precisely because of Blair’s Bush War.