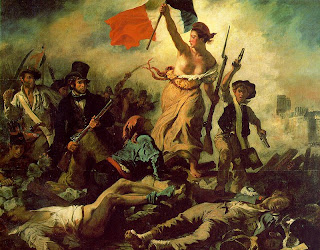 The problem for France was that the Revolution of 1789 had taken history at a rapid trot through several stages, effectively creating some serious fault lines in civil society, the underlying structures of law, culture, society and political tradition that help sustain more stable forms of constitutional development. Put this another way: in the brief period from 1789 to 1791, France covered the kind of political ground that had taken close on a hundred years in England.

Thereafter, the Revolution went into overdrive, pushing matters to an extreme undreamt of by even the most radical of the English Whigs. One by one, as Edmund Burke had predicted in Reflections on the Revolution in France, civic and political institutions were knocked flat, until only the army remained; and with the army came Napoleon; and with Napoleon came dictatorship. Napoleon overcame the weakness and the fractures of civil society by force and by force alone.

A return to more traditional forms of rule would demand high degrees of political awareness and sensitivity. Above all it would require an understanding that politics in France had undergone a fundamental change, that there could be no return to the older forms of absolutism. Progress would therefore require the kind of partnership between the crown and the dominant sections of the civil community, in essence the solution of the Glorious Revolution.

But the Bourbons came back in the person of Louis XVIII and, more particularly, in the person of Charles X, having learned nothing and forgotten everything. Tensions built, only to be released not in a mature parliamentary system, but by the valve of revolution. It might even be said that in the period from 1815 to 1870, French history played out many of the events of the Great Revolution in a kind of slow motion.

The monarchical solution failed in all of its forms, Bourbon, Orleanist and Napoleonic because it was too narrowly conceived; because it lacked firm foundations, party foundations, in society; because it lacked a clear sense of direction and commonly accepted goals; because it failed to heal the fractures of the past. In the end only the Republic would do, the form of government that divided the French the least; tolerated not for what it was but for what it was not.
Posted by Anastasia F-B at 16:29