Mad, Bad and Wonderful to Know 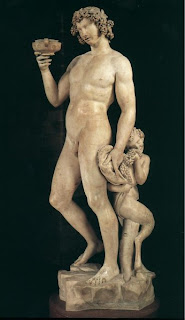 Although Dionysus-also known as Bacchus-is popularly regarded as the God of Wine, he is far more than that. The spirit of vegetation, of fertility and of generation, he presides over the mysteries of life and death. Beyond that he represents wildness and danger, danger in nature, danger in magic. He is the spirit of the wilderness, of untamed energy, of male sexual power, intoxication, joy, shamanism and madness. In the most complete sense he is a God of nature, at once creative and destructive.

Dionysus is the original Green Man, his image draped with grapevines and ivy. Although incorporated into the Olympian pantheon his original homeland is though to be Thrace in what is now Bulgaria. Besides, there is something different, older and wilder about Dionysius which makes him less than comfortable among the more settled Greek deities. According to Marija Gimbutus, an archaeologist, he is the most ancient of the Indo-European gods, one who began as a botanic spirit.

What I found of particular fascination to Dionysus, what attracted me to his cult, was the fact that this wild male God was originally served only by women. And what women! They were the Maenads-the Bacchanals in Latin-the leaders and initiators of the Dionysian rite. Descriptions in the Middle Ages of naked, wild-haired women dancing in the forest around the figure of a lone, virile and horned man, taken to be witches and Satan, might very well derive from the Maenads and Dionysus. The Maenads were later to be joined by male satyrs, so it’s reasonably easy to imagine what went on in their parties! 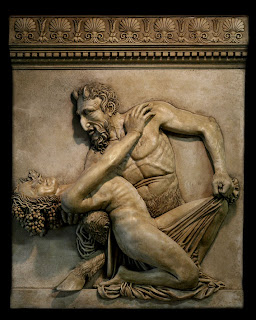 Dionysus, followed by women, always had a particular reverence for women. His first act as a God was to travel to Hades to bring his mother, Semele, a mortal woman, up to Olympus, where she shared in his glory. Interestingly, and despite his reputation, he was the only God among the Olympians to be happily married.

The festivals of Dionysus featured most frequently processions by moonlight, masked revellers processing to music. At the very heart of his worship lay one of the great rites of the ancient world, the Dionysian Mysteries, in which participants used wine and other stimulants to enter into a trance-like sate, a state in which all inhibitions were lost. Only the true initiates were allowed into the heart of the mystery and, as no description survives, that too is lost.

Given its nature, that of freedom and wild release, the cult of Dionysus was popular with those on the margins of society, particularly women in a male-dominated world. Worship of the God spread rapidly across the Greek and Roman world. In the fourth century AD women in the British Channel Islands crowned themselves with leaves to perform Dionysian rites. According to one report they “shouted even louder than the Thracians.”

Dionysus was a sociable God most often surrounded by a large retinue, not just of Maenads and Satyrs but also sacred animals and other Gods. He is closely allied with Pan, Hecate, Kybele, and with Demeter and Persephone, her daughter. He also has close associations with Apollo and the two divinities were eventually to achieve equal status at the great oracle at Delphi, taking seasonal shifts, so to speak, Apollo in the summer, Dionysus in the winter. Thinking about it the two represent the conflicting forces in nature and civilization, Apollo symbolising rationality and Dionysus wild ecstasy, a contrast and a tension that Nietzsche was to recognise in The Birth of Tragedy.

Popular as it was, the cult of Dionysus survived well into the Christian era. Subject to continuing persecution, the maenads fled to the forest where they became-dare I say it-the first witches of the new age. But Christianity could not free itself entirely from the spirit of Dionysus. For you see Dionysus was wine and by drinking wine one shared in the sacrament of his body. I wonder if the Pope is mindful of that residue of the ancient world. :-) 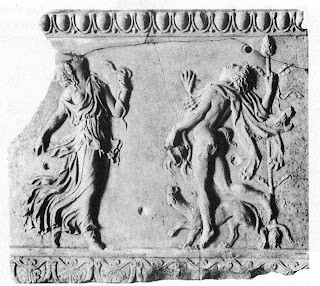 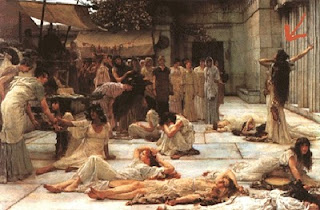 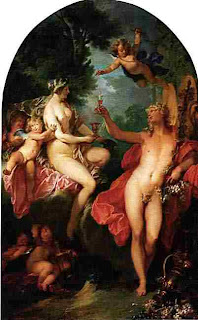 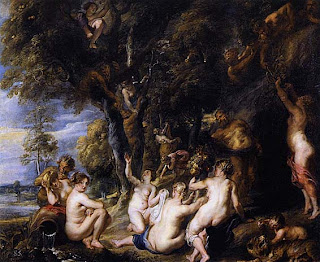