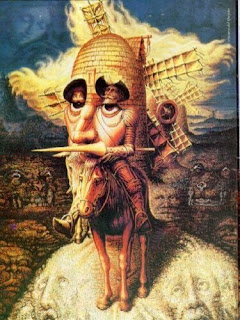 I read a story recently about a plan to post all of Don Quixote, the great masterpiece of Spanish literature, on Twitter. I’m sure most people know how Twitter operates, but for those who do not messages have to be posted within a 140-character limit. Now, Don Quixote comes in at close to five hundred printed pages, so this quixotic project will have to produce tweet on tweet on tweet, some 8,200 just to get to the end of the first volume alone!

The enthusiasts behind this scheme have grouped themselves as the Twijote project. It seems to me that we have people here whom Don Quixote himself might very well have understood, people driven mad by literature and romance. The first rule that has been set is that that the thousands of tweets required must come from one-off visitors to the Twijote site. There they are given the next block of 140 characters to post.

Pablo Lopez, a web designer from the city of Vigo who thought up this sand-sifting exercise, has estimated that it will take about a year to get to the end of volume one, if people stick with the project. “The idea”, he says, “is to show that culture can exist in social media-that it is not just the place for nerds and freaks.”

I’m so unfair, but it seems to me that this task is the very acme of what it means to be a nerds and a freak! Still, volunteers have signed on from across the Spanish-speaking world as well as from Finland. No, I don’t know why Finland either!

I suppose it is worthy of note that such a novel has sponsored such a task, a novel of a deluded man in search of the substance of his own fantasies. What’s the point, what purpose is served other than action for the sake of action, just another contribution to the endless stream of cyber babble? I rather think that dear old Pablo, the Cyber Knight of the Sad Countenance, rather needs just a little touch of realism, a little touch of Sancho Panza. Ah, well, never mind, it’s clearly a labour of love, and as the Don himself said everything is artifice or illusion.:-)
Posted by Anastasia F-B at 15:54