The Frog and the Bear 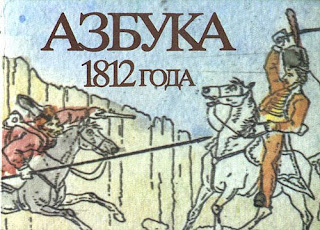 Napoleon’s invasion of Russia in 1812 had one small but significant effect: it ended a long-standing ban of political caricature in the country. There followed a remarkable and inventive flourishing all directed against the imperious little Frenchman, prints which a direct influence on the better known work of George Cruickshank and Thomas Rowlandson. The artist who had the greatest impact was Ivan Ivanovich Terebenev, whose work in this area I’m only now becoming aware of thanks to Mark Bryant, author of The Napoleonic Wars in Cartoons.

Traditional cartoon images in Russia came in the form of brightly coloured woodcuts known as lubok, featuring animals and mythological themes to pass comment on human activities. In 1720 they were effectively banned by new censorship codes preventing the publication of lubiki which were considered to be an attack on the Orthodox Church, the imperial government or the personal honour of an individual. The ban was lifted after Napoleon’s invasion, when traditional techniques came back into fashion, given a new edge by the influence of western drawing.

Terebenev was among the most creative of the new school, drawing almost fifty satirical prints lampooning the French in the years leading up to his early death in 1815. Carried across the country by printsellers, his work also appeared in journals, in book form and even on fine china. His best known work is Azbuka 1812 goda-A Gift to Children Commemorating the Year 1812-also known as Terebenev’s ABCs, an anthology of anti-Napoleon cartoons.

Such was his influence that his work was redrawn for the British market by Cruikshank, who produced several adaptations of the Russian originals. Trebenev’s 1814 Shepherd and Wolf, which depicts Alexander I as a shepherd holding Napoleon in the shape of a wolf by the nape of the neck while French generals run away was reproduced in England by Rowlandson, who substituted the Prussian general Blücher for the Tsar.

Terebenev had a long afterlife. After the German invasion of Russia in 1941 many of his anti-Napoleon cartoons were republished alongside cartoons mocking Hitler in a collection entitled Russia: Britain’s Ally, 1812-1942. In Russia itself the satirical magazine Krokodil might be said to have continued the lubok tradition reworked by Terebenev, producing parodies of Hitler and the Nazis far more savagely biting than anything ever drawn in the west.