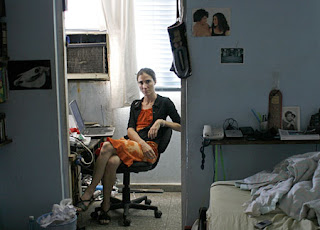 I have never understood-I don’t want to understand-the passion shown among certain leftie circles for the beastly Castro regime in Cuba, as repressive and as loathsome as any other dictatorship of any other age, a regime that incarcerates, tortures and oppresses; a regime that sends people as diverse as homosexuals and Jehovah’s Witnesses to camps to be‘re-educated.’

Fidel, as much influenced by Adolf Hitler as by Karl Marx, possibly even more influenced in practical terms by the former, may no longer have his fingers directly on the wheels of power, but he’s still there in the background, haunting the meagre Cuban feast rather like the ghost of Banquo. He and his brother Raul, now the public face of the tyranny, look so old, so decrepit, rather like the system they nurtured. I have no doubt that they represent the wave of the past, soon to dash on the breakwater of history. And what is the wave of the future? I would like to think that was best pictured in the shape of the courageous and indomitable Yoani Sánchez, creator of Generación Y, a really super blog about the harsh realities of life in Cuba. http://www.desdecuba.com/generationy

I’ve mentioned Yoani before in a blog headed Generación Y -Exposing the Corruption of Castroism, where I mentioned that, unable to silence her, the authorities had her physically assaulted. Still she talks on under the most difficult of circumstances. The Generación Y blog was blocked in Cuba in March 2008 forcing her to ‘talk blind’. She now emails her contributions and pictures to friends abroad who then post them to the website, though she herself cannot see the results. Of this Yoani has said “There is no censorship that can stop people who are determined to access the internet.” This is the true wonder of the internet-it overcomes silence, it overcomes isolation, something that dictators have always relied upon in the past.

It is precisely because of the actions of the thuggish and frightened Cuban dictatorship that Generación Y, starting in the most unpromising circumstances, is now one of the most influential blogs in the world getting about a million hits a month. In 2008 Yoani was even named by Time magazine as one of the hundred most influential people in the world, saying that “under the nose of a regime that has never tolerated dissent, Sánchez has practiced what paper-bound journalists in her country cannot; freedom of speech.” Recently Barak Obama himself responded in person to one of her posts.

One measure of her success is that her blog was attacked by Foul Fidel who ‘expressed his grave disappointment that there could be a young person in Cuba today who thinks as she does’. This came soon after she was awarded the 2008 Ortega y Gasset Prize. A response was published on Generación Y, a contribution from Reinaldo Escobar, Yoani’s husband:

The ex-president disapproves of the fact that Yoani accepted this year’s Ortega y Gasset Prize for Digital Journalism, arguing that the prize is something that imperialism favours to blow its own horn. I recognise the right of this gentleman to make this comment, but I allow myself to observe that the responsibility implied in receiving a prize is never comparable to that of bestowing one, and Yoani, at least, has never awarded a medal to a corrupt person, a traitor, a dictator or a murderer. I clarify this because I remember perfectly that the author of these reproaches was the one who placed (or commanded to be placed) the ‘Order of Jose Marti’ on the lapels of some of the most terrible and undeserving men possible: Leonid Ilyich Brezhnev, Nocolae Ceausescu, Todor Zhikov, Gustav Husak, Janos Kadar, Mengistu Haile Mariam, Robert Mugabe, Heng Samrin, Erich Honecker and others that I have forgotten.

Yes, by their friends shall ye know them.

I know what Cuba is like. I’ve been there and I’ve seen how people live. I’ve met economists and other specialists who prefer to work as hotel porters because the gratuities they receive are the only way they can make a living wage. I see these things because I like to travel independently, not being bussed around in tour groups, going to hotels and resorts from which ordinary Cubans are banned. I’ve seen the harassment the people of Havana receive at the hands of the grey-shirted police, who stand on literally every street corner. It’s comforting to know that Generación Y allows the rest of the world to see these things also, to understand that freedom, the freedom to speak one’s mind without fear or intimidation, is the greatest right of all.
Posted by Anastasia F-B at 16:49