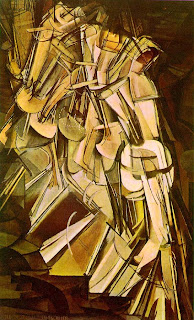 Marcel Duchamp’s A Nude Descending a Staircase, No. 2 is one of my favourite works of art of the last century. Painted in 1912 it was first exhibited at the Société des Artistes Indépendants, later becoming a centre-piece at the New York Armory Show the following year, where it caused a huge sensation.

Too revolutionary for the age, it was subject to all sorts of outrage and parody, being compared to a collapsing suit of Japanese armour, amongst other things. Newspaper cartoonists created their own versions, lampooning the works as An Explosion in a Shingle Factory or The Rude Descending a Staircase. A reward of ten dollars was offered by The American Art News to the first reader who ‘could find the lady’ amongst the inter-locking planes and jagged lines, though what gave them the impression that the Nude was ‘a lady’ I really can’t say, other than the absence of a, ahem, member in motion!

Neither Cubist nor Futurist, in brilliantly captures elements of both in the progress of the figure through space, with dynamic movement and a train of afterimages.

Move your arm quickly. You will see the ghostly traces as it goes from start to finish. It was this that Duchamp tried to capture, a combination of movement in space and time frozen in one stunning instant. It shows more than anything the revolutionary impact photography had on painting, offering new visions and insights. It shows the influence in particular of the English photographer Eadweard J. Muybridge, whose Woman Walking Downstairs appeared in his 1887 collection The Human Figure in Motion. If anything it’s a synthesis of Muybridge in a single image-so it must be a woman after all. Can I get the ten dollars? :-) 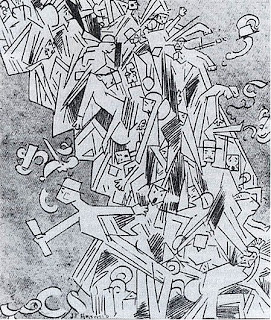 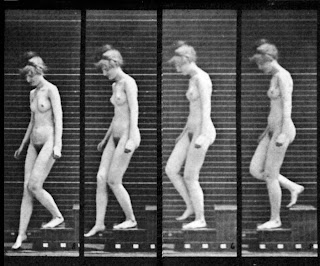 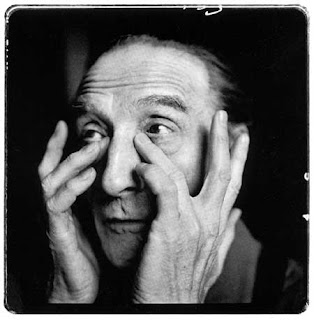