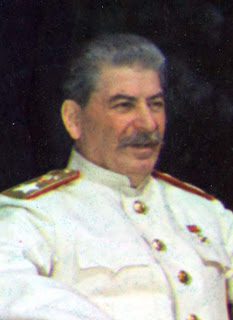 This is a question that can, I think, be tackled on a purely empirical level, proceeding by example and analysis.

Stalin was in many ways a superb tactician; cool, rational, intelligent and utterly ruthless. However, his grasp of international relations was never the strongest of his talents. On occasions his miscalculations had disastrous implications, both for the immediate and long-term security of the Soviet Union. To begin with the problem was one of ideological rigidity. That is to say, once a policy was adopted by the Third International it was followed without deviation, regardless of local circumstances and changing political conditions. In the 1920s the United Front strategy favoured by Stalin, and held to throughout angry debates with Trotsky and the United Opposition, lead to major setback in China, where the local Communist party was all but destroyed by the nationalist Kuomintang, at a time when Chiang Kai-shek was an honorary member of the Comintern!

Having learned nothing by the China debacle Soviet and Comintern policy was then piloted by Stalin into the even more disastrous Third Period, an ultra-left switch based on the contention that all Social Democratic Parties, no matter what their policies, were forms of Social fascism. By this understanding all Communist parties were instructed to concentrate their efforts on defeating their rivals in the labour movement, thus ignoring the threat presented by real Fascism. The implications for Russian security in this strategy were quite profound; for it divided the German left in the face of Hitler, and led to the destruction of the KPD in 1933, and the creation of a new and dangerous threat to the Soviet Union. There is, of course, no guarantee that a united front strategy in Germany would have stopped Hitler; but the divisions among his enemies made things considerably easier for him.

Stalin then sought to check the further development of Fascism, and the threat posed by Germany, by a new emphasis on political unity in Popular Fronts, paralleled by an attempt to advance notions of collective security through the League of Nations. When this was perceived to have failed he then reached an understanding with Hitler, turning the political and diplomatic world upside down in the Nazi-Soviet Pact of 1939, an important preamble to the Second World War. Looked at in strictly rational terms the Pact was perfectly understandable from Stalin's point of view; what was not understandable was the continuing trust he placed in Hitler, which led to near disaster in 1941.

So, by the first and most important standard of all, that an adequate foreign policy has to be premised on national security, safeguarding the country from attack, Stalin's must, in my estimation, be judged a serious failure. What of the post-war period? Well here Stalin's actions in Eastern Europe, and his failure to come to terms with the United States, were crucial factors in the onset of the Cold War, the formation of NATO and the acceleration of the arms race. What might be termed the 'Politics of Force' was to place an intolerable burden on the Soviet economy, without measurably increasing national security. It was a burden that, in the end, the system could not stand, and the dissolution of the Soviet Union was perhaps Stalin's final legacy.
Posted by Anastasia F-B at 15:48