The Age of Outrage, or Irish Blasphemers 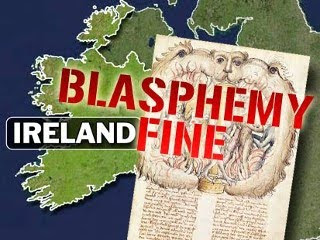 Ireland’s new blasphemy law came into force at the turn of the year. So, if you intend to exercise your right to free speech, the right to criticise religion, just don’t do it there; for, if you do, you may very well find yourself poorer by 25,000 Euros.

My own position here is quite clear: I would never knowingly attack or denigrate the faith of others, never knowingly cause offence. But what is one to make of a law that defines blasphemy as “publishing or uttering matter that is grossly abusive or insulting in relation to matters sacred by any religion, thereby intentionally causing outrage among a substantial number of adherents of that religion”?

I really don’t know the background here but I wonder if Irish legislators paused to consider that we live in an age of outrage, an age when people are all too eager to take offense against perceived insults, intentional or otherwise. What a backward step in this second decade of the twenty-first century for a European nation to attempt something as dangerously abstract as silencing people to protect ideas. I offer no apology for this because religion, all religion, is based on an idea or a system of ideas, some good, some bad, some dreadful.

I’m not an atheist, though my personal beliefs are quite subtle. I despise the likes of Richard Dawkins, an intellectual bully who seems to be advancing old intolerant absolutes in new clothing. I do, however, wish Atheist Ireland, an organisation set up to mount a challenge to this law, Godspeed! They have now published a book of twenty-five quotations guaranteed to cause outrage amongst the outrageable. (Yes, I know it’s a neologism; please don’t be outraged!).

Michael Nugent, the group’s chair, said that it would challenge the law through the courts if charged with blasphemy. In a civilized society, he said, people have the right express and hear ideas about religion even if other people find these ideas to be outrageous. Here are two of Atheist Ireland’s quotations to outrage you;

1. Also it has another name - The Word of God. For the Christian thinks every word of it was dictated by God. It is full of interest. It has noble poetry in it; and some clever fables; and some blood-drenched history; and some good morals; and a wealth of obscenity; and upwards of a thousand lies... But you notice that when the Lord God of Heaven and Earth, adored Father of Man, goes to war, there is no limit. He is totally without mercy - he, who is called the Fountain of Mercy. He slays, slays, slays! All the men, all the beasts, all the boys, all the babies; also all the women and all the girls, except those that have not been deflowered. He makes no distinction between innocent and guilty... What the insane Father required was blood and misery; he was indifferent as to who furnished it

2. There is some question as to whether Islam is a separate religion at all... Islam when examined is not much more than a rather obvious and ill-arranged set of plagiarisms, helping itself from earlier books and traditions as occasion appeared to require... It makes immense claims for itself, invokes prostrate submission or ‘surrender' as a maxim to its adherents, and demands deference and respect from nonbelievers into the bargain. There is nothing-absolutely nothing-in its teachings that can even begin to justify such arrogance and presumption.


The first is by Mark Twain, describing the Bible, and the second by Christopher Hitchens. Hitchens might be an easy target but who in their right mind is going to weigh into Mark Twain? :-))

Actually, I find the whole thing slightly amusing. I’m a little surprised that Atheist Ireland can’t also see the humorous side to this fatuous legislation. It’s really no more than a piece of legal window-dressing intended for the multi-cultural age, the age of supermarket faith, pick and choose as you will.

The Irish Constitution previously only offered protection to Christianity, a technical oversight that has now been made good. I assume the Irish Director of Public Prosecutions will have the good sense to ignore Atheist Ireland’s provocation, but what if the offended masses start beating down the door? The sensible thing here would have been to get rid of the anachronism of blasphemy legislation altogether and introduced some measure based on incitement to religious or racial hatred. Never mind: I disapprove of what you say, but I will defend to the death your right to say it…unless you happen to live in Ireland. 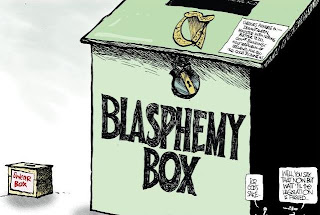