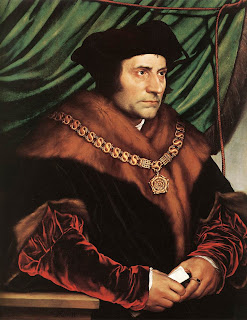 One aspect of the career of Sir Thomas More-Saint Thomas More-that tends to escape popular attention was his enthusiasm for the persecution of heretics, because it is not at all in accordance with the saintly 'Man for all Seasons.'

In religious and intellectual terms More was highly orthodox. The primary message of Utopia, for example, is the need for order and discipline, not liberty. The society described is totalitarian, about as far removed from present day ideals of freedom as it is possible to get. This is a world where attempts to discuss public policy outwith officially allowed forums are punishable by death.

So, More placed great value on the attainment of harmony and on a strict hierarchy of order. All challenges to uniformity and hierarchy were perceived as dangers; and in practical terms the greatest danger, as he saw it, was the challenge that heretics posed to the established faith. The most important thing of all for More was to maintain the unity of Christendom. The Lutheran Reformation, with all of the prospects of fragmentation and discord, was for him a feared and fearful thing.

His own personal counter-attack began in the manner that one would expect from a writer. He assisted Henry VIII with the production of the Defence of the Seven Sacraments, a polemical response to Martin Luther's On the Babylonian Captivity of the Church. When Luther replied with Contre Henricum Regem Anglie, with all of the venom and vulgarity of which he was capable, More was given the task of firing off a counter-broadside, which he did in Responsio ad Lutherum. Just as violent and as vulgar as Luther, this book deepened More's commitment to the forms of order and discipline outlined in Utopia. Heresy was a disease, a threat to the peace and unity of both church and society.

More was more than a writer: he was a lawyer, a political and one of the King's chief councillors, so he was able to give his hatred of heresy some practical direction. His early actions included aiding Cardinal Wolsey in preventing Lutheran books being imported into England. He also assisted in the production of a Star Chamber edict against heretical preaching. Further literary polemics appeared under his name; but his greatest opportunity came in October 1529, when he was appointed Lord Chancellor of England.

The task before him was simple enough "Now seeing that the king's gracious purpose in this point, I reckon that being his unworthy chancellor, it appertaineth...to help as much as in me is, that his people, abandoning the contagion of all such pestilent writing, may be far from infection."

Heresy was a cancer, and could only be stopped by burning, of books and of people. In June 1530 it was decreed that offenders were to be brought before the King's Council, rather than being examined by their bishops, the practice hitherto. Actions taken by the Council got ever more severe. In 1531, one Richard Bayfield, a book pedlar, was burned at Smithfield. Further burnings followed. In The Confutation of Tyndale's Answer, yet another polemic, More took particular delight in the execution Sir Thomas Hitton, describing him as "the devil's stinking martyr". The extraordinary persecution only came to a (temporary) stop when More resigned as Lord Chancellor in May 1532. It was the end of Utopia. 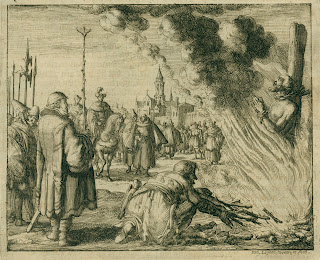