Wootton Bassett-the Pulse of my Nation 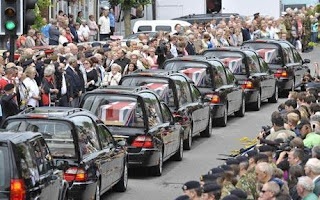 A couple of days ago a contact of mine happened to mention here that their was a Facebook page dedicated to protesting against the proposed march of an extremist group-one I refuse to name-through the streets of Wootton Bassett, a little town in Wiltshire, a town that has received the bodies of dead soldiers returning from Afghanistan. At the time he mentioned this it had around half a million members. I joined as 535,410. When I checked this evening membership stood at almost 666,666.

There are three points I would like to make here. First, I think that people have a right to protest no matter how repellent I happen to find the cause that they have embraced. I am opposed now to the war in Afghanistan and what I consider to be the fraudulent reasons that keeps our army in that wretched country. I also believe that the principal victims of the campaigns in both Iraq and Afghanistan have been local people, Muslims, mostly killed, I have to say, by other Muslims. So, yes, people have a right to protest against this war. The frontier comes when a democratic right to express a view turns into a gross and shabby provocation.

The second point is that I am deeply distrustful of sudden flash mobs, of internet campaigns, of what I think of as the Twitter charge. I’ve written about this phenomenon here. I have never joined in any of these mass virtual uprisings...until now. Why did I do so? Because that little town has been transfigured by the way in which it has received the dead, those boys, those beautiful boys. Every time I see them honoured on their silent return home I can’t help but cry. This is no affectation. I have before me a whole panorama of possibilities, of opportunities and challenges. I have a future of what seems to be endless time. Then I see some futures closed forever, futures of those even younger than I am. It winds me, brings me to understand that time is not endless, my time, their time.

Third, I come from a family with strong associations with the military. Politicians may be loathsome but soldiers do their duty; they go where they are ordered to go. Patriotism may be a traduced concept now in a nation that seems to have no clear idea of itself, but it lives if nowhere else in the fallen, in these boys whose remains process through Wootton Bassett, who are received with such quiet dignity and respect, beyond politics and beyond passion. To attempt to use this place to make a political gesture is ugly beyond comparison. More; so far as I am concerned it’s treasonable, an attempted show by people who owe this country everything and give it nothing.

So, for these reasons I added my name to the mass protest, I dare say joining with people who have less noble motives. It does not matter: I had to do it. I don’t think these things make any difference but it’s a kind of pulse, our pulse, my pulse. I am proud to be 535,410. 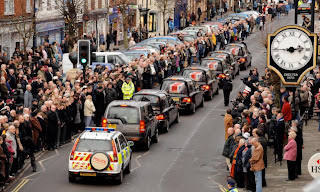