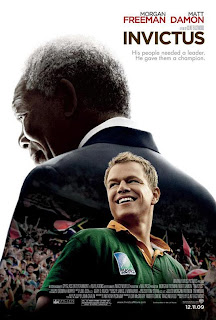 Invictus is an astonishing movie, not at all what I expected. Directed by Clint Eastwood and starring Morgan Freeman as Nelson Mandela and Matt Damon as François Pienaar, the captain of the South African rugby team it purports to tell the story of the events culminating in South Africa’s victory in the 1995 Rugby World Cup. But it is so much more.

It’s the story, in microcosm, of South Africa in the immediate post-apartheid era, a nation where some of the deeper wounds have not yet healed. And for the black majority the Springboks, the national rugby team of South Africa, is not about sport; its very existence is a symbol of past injustice and oppression. The club might have vanished altogether, the majority in the African National Congress, the ruling party, wanted it to vanish. But it stayed, thanks to the vision of Nelson Mandela.

Based on John Cook’s Playing the Enemy: Nelson Mandela and the Game that Changed the Nation, the movie begins just after Mandela became president in 1994. I know that America has some incredibly talented black actors, particularly when it comes to taking on unfamiliar roles. Forest Whitaker was tremendous as Idi Amin in The Last King of Scotland, but, my goodness, Freeman seems to have got right inside the skin of Nelson Mandela; he even sounds like him!

Anyway, Mandela has to walk a fine and dangerous line, somehow reconciling the hopes of the black majority with the fears of the white minority. The divisions of the country, the hostility and the mistrust, are well shown in Mandela’s own security team, when he insists on blending both black and white officers.

Now while tackling all of the major issues the country has to face the president also finds time for rugby, looking ahead to the world championships which South Africa is scheduled to host the following year. Having persuaded the South African Rugby Board to retain the name and colours of the national team, he then has a private meeting with Pienaar, convincingly played by Matt Damon, also with a good South African accent!

The team has been playing badly; the president hopes for a recovery in time for the World Cup, but he hopes for more: he hopes that sport will bring the people of South Africa together, all of the people, black and white. It’s during this meeting that he mentions in passing Invictus-Unconquered-a poem by William Ernest Henley, which comforted and encouraged him while he was a prisoner on Robben Island. Pienaar later sees the tiny cell where Mandela was imprisoned and himself takes encouragement from the poem.

Bit by bit under the captain’s guidance the Springboks begin to emerge from the dead so to speak. Black South Africans, who at one time would cheer for any team but the Springboks, begin to mellow. Chester Williams, played by McNeil Hendriks, the one black player in the team, becomes a popular hero. In the end there is an absolutely thrilling climax when South Africa plays the New Zealand All Blacks in the finals. It was at this point I was willing South Africa on with all of my heart. They won, of course, we know that; it’s history. What was important was not the winning it was the way of winning. By this point even the white and black security men have warmed to each other. When Pienaar receives the cup President Mandela says “Thank you for what you have done for the country,” to which he replies, “No, Mr President, thank you for what you have done.” Amen to that.

Even if one does not happen to like rugger-and I’m no great fan-this is a tremendous, uplifting and exciting story, wonderful orchestrated by Eastwood, a truly excellent maker of movies.