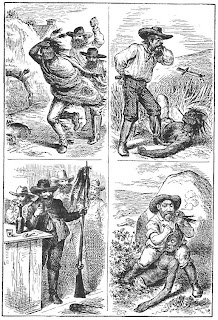 The notion of the 'savage in all of us' is an ancient one, finding a place in European thought all the way from Plato to Conrad and beyond. Consider Montaigne's essay on cannibals, in which he says that the civilized Frenchmen of his generation during the Wars of Religion are more savage and more cannibal than all the warrior tribes of Brazil:

I think there is more barbarity in eating a man alive than in eating him dead; and in tearing by tortures and the rack a body still full of feeling, in roasting a man bit by bit, in having him bitten and mangled by dogs and swine...than in roasting and eating him after he is dead.

As for the dangers and paradoxes in the mission of imperial civilization one could do no better than heed the words of the eponymous hero of "Gulliver's Travels";

A crew of pirates are driven by a storm they know not wither; at length a boy discovers land from the top-mast; they go on shore to rob and plunder; they see a harmless people, they are entertained with kindness, they give the country a new name, they take formal possession of it for the king, they set up a rotten plank or a stone for a memorial, they murder two or three dozen of the natives, bring away a couple more by force for a sample, return home, and get their pardon. Here commences a new Dominion acquired with a title of Divine Right. Ships are sent out at the first opportunity; the natives driven out and destroyed, their princes tortured to discover their gold; a free licence given to all acts of inhumanity and lust; the Earth reeking with the blood of its inhabitants: And this execrable crew of butchers employed in so pious an expedition, is a modern colony sent to convert and civilize an idolatrous and barbarous people.

Who exactly, one has to ask, are the Yahoos and who are the Houyhnhnms? And is the savage no more than a response to savagery? Yes, the Yahoos are Swift's satire on a depraved humanity. But what of the Houyhnhmns who, in the midst of their wisdom and cultivation, discuss the possibility that the Yahoos should 'be exterminated from the face of the Earth’?

Yes, there are lots of questions and no easy answers.
Posted by Anastasia F-B at 15:55