The Limits of Philanthropy 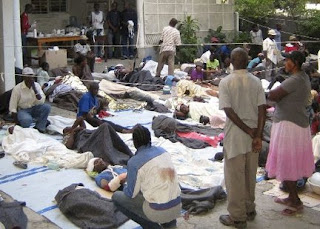 A great natural catastrophe inevitably induces feelings of sympathy and solidarity. The world rushed to aid the people of Haiti, or at least promised to do so. The newspapers and magazines I read have been replete with ads from charities, asking for contributions to disaster funds.

Perhaps in the first rush of sympathy you contributed; I know I did. But now another story unfolds, highlighted in the leader in this week’s Spectator. It seems to have made no difference if you, or I or anyone else contributed one pound or a million pounds – nothing seems to be getting through, nothing that is making any difference to most of the desperate people of that benighted country.

It’s clearly not a lack of will by individuals or by nations. But Haiti is a country, a system of government, that never was. Even the basic infrastructure that would allow aid to be delivered on the scale that is needed is lacking. Badly and indifferently ruled in the best time- and that is a term that has to be used advisedly in relation to Haiti – it has now descended into chaos and anarchy. There are strong historical factors here, but there is more. For you see, Haiti, so far as aid is concerned, truly is a black hole. Over the past twenty years, the Spectator says, $7 billion of aid has been spent, a flow of largesse that has got quicker over the years. In 2008 alone some $873 million in aid was poured into the country, a tenth of the national GDP.

Where did it go; what was it spent on? Shanty towns and tin huts, perhaps? Port-au-Prince, the capital, turned out to be little more than a vast shanty town. The truth is that most of the aid money has only served to fuel corruption, the one great growth industry in the place. An IMF assessment of 2004 concluded that 30 per cent of Haitian civil servants were phantoms – zombies, perhaps? – who existed only for the purpose of extracting salaries from the government.

Yes, this is bad, but what is worse is that this kind of international ‘welfarism’ only serves to suck whatever life remains in the local economy. It’s an invidious situation that our politicians, too blinded by notions of doing 'the right thing', are unable to challenge; even the Tories have declared the intention to ‘ring fence’ the international aid budget, which for this country alone amounts to £7.8 billion.

Once the Haitian emergency is over some hard questions really will have to be answered. So much development aid, it seems to me, is little better than a salve to conscience, a kind of post-imperial hangover.
Posted by Anastasia F-B at 16:07