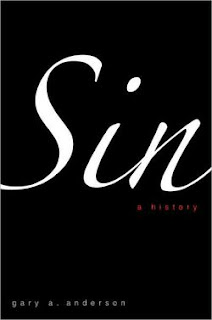 Sin is all about guilt, at least that’s what I thought until I dipped into Gary Anderson’s Sin: A History. I now know that it’s not about guilt at all: it’s about debt and indebtedness. It’s a singular feature of this book that Anderson has managed to make sin exciting, along with Old Testament exegesis!

Here the key to understanding is metaphor: that sin is a burden to be carried, a debt to be paid, a stain to be cleansed away. Anderson maintains that the way in which sin is understood and perceived determines the manner in which one deals with the consequences. There is in this, he continues, a revolutionary process at work.

In early Judaism sin as a burden to be carried was the dominant theme, expressed in the ritual of the scapegoat, sent into the wilderness carrying all of the transgressions of the community. The change here came in the period of Persian domination between the sixth and fourth centuries BC. The Aramaic languages now became part of religious discourse, opening up new metaphorical visions. Sin was no longer a burden to be expelled but a debt to be settled, rather in the fashion of an economic transaction. For the Israelites the Babylonian Exile became a way of paying off the accumulated debts of the past. Later the Christians were to perceive the sacrifice of Christ in similar terms, the price for centuries of human misdemeanor.

This change had major theological consequences. Human action was now central to the whole equation. It was no longer sufficient to expel sin as a collective into the wilderness and thus out of the sight of God, no, there now had to be acts of personal expiation. Imagine, if you will, divine debit and credit, where one is constantly obliged to pay close personal attention to the balance for fear of that ultimate letter from the celestial bank!

So, good works became an important way of staying in credit. But, perceived in these terms, a problem begins to emerge in the later Christian church; for if sin was a debt that could be paid alms could be given not just to the poor, rather an obsession in the later Middle Ages, but by a less direct route into the bank of the Church itself, which in return guaranteed remission. Thus came the paper indulgences, thus came a kind of spiritual inflation or debasement of the currency of salvation.

The Reformation began as a reaction against this kind of accountancy, swinging the pendulum away to the opposite extreme. Not only were paper indulgences worthless the notion of ‘good works’ went with them. God’s Grace, Luther and others argued, was inscrutable. One’s earthly actions, in other words, had no bearing at all on the divine calculus; one was saved or one was damned, and that was that! Let’s just imagine a world without sin, a world without fear, a world without debt, a world without regret, a world without sin. Yes, let’s imagine a Pagan world!
Posted by Anastasia F-B at 16:36