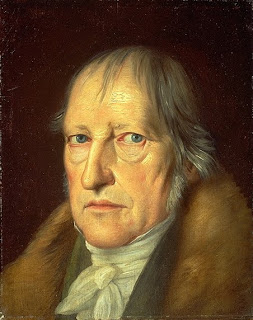 I think the Hegelian system, the philosophy propounded by Georg Friedrich Hegel, is positively malign. Why? Well, here we go!

I will try to make this as simple as I can without, I hope, losing sight the intellectual dynamics involved, not easy, I assure you! Hegel perceives history as a quest for self-realisation, a move from the less complete to the more complete forms of an existence; of an unfolding of freedom.

The evolution of the Idea in history was akin to the voyage of Odysseus, an analogy that he uses himself. His dialectic is one where the human spirit first become alienated from itself, and then through a growing awareness of the forms of alienation becomes capable freeing its potential and achieving liberation through self-awareness. Paradise Lost is Paradise Regained. History, in other words, was a tragedy with a happy ending.

In practical terms this means that the individual life, the individual destiny, if you like, is meaningful only insofar as it gives shape and purpose to the Spirit moving through history. Napoleon made use of the moment to create his own fate but history made use of him by the 'cunning of reason' to shape events to its own purpose and ends. His actions brought freedom to Prussia and Germany from the old forms of historical identity, and even his downfall did not bring the downfall of freedom. Napoleon lived; the Spirit moved; the world has been permanently changed.

As the Spirit continually moves forward to higher forms of expression, it breaks free from all encumbering institutions. As Hegel expresses it, this is the 'negation of all that is.' In Hegel's system of things the relation between Spirit and matter is likened to the relationship between slave and master. It is the process of emancipation, in other words, that gives shape to the history of the world. In the Philosophy of History he expresses it thus, "The History of the World is none other than the progress of the consciousness of freedom...the Eastern nations know only that one is free; the Greek and Roman world only that some are free, while we know that all men absolutely (man to man) are free."

So, each new revelation destroyed the world to which it came. The Spirit, at war with itself, as truth gave way to truth; at war with matter and the institutions in which truth had been enslaved. The Spirit in seeking objective realisation of itself is always moving beyond. For a Roman to hold on to Paganism and resist the advance of Christianity was effectively to embrace the dead, a shell without habitation.

For Hegel history "aims at the conviction that what was intended by eternal wisdom was actually accomplished." There is no failure in history, for "God governs the world: the actual working of his government-the carrying out of his plan is the history of the world." All has its purpose and there is nothing to regret-even injustice has its place. Conflict was resolved by transition to a higher phase of being, no matter how many victims are left along the way. For, after all, "the particular is for the most part, of too trifling value compared with the general for which individuals are sacrificed and abandoned."

There you have it, and I am sure you can detect the elements that would lead to Marxism and other historical absolutes - to teleologies of all kinds, of the left or of the right. It's seductive, it's persuasive, it's comprehensive and it’s monstrous.
Posted by Anastasia F-B at 16:10