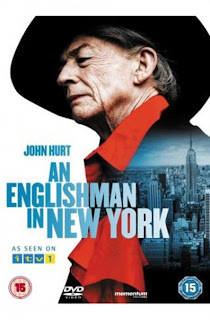 Over thirty years ago John Hurt played the young Quentin Crisp in The Naked Civil Servant, a television drama. Now he has reprised the role in An Englishman in New York, a movie about Crisp’s later days in American exile.

Hurt is a consummate performer and he managed to capture something of both the exuberance and the loneliness of a man who had the misfortune to turn into a gay icon. There may be nothing wrong in being gay; there is everything wrong in being an icon! I offer that purely as a personal opinion, of course; the real Crisp seems to have made a profession out of it. His was an existence of affectation and gesture. It seems to me-and I have to be honest-that there was a terrible emptiness, a pointlessness to a life constantly well-presented rather than well-lived. Crisp lived not for others but through the eyes of others. I wear silk therefore I am.

He almost lost his halo, though, when, in one of his question and answer shows in the 1980s he described aids as a ‘gay fad’, a statement he refused to retract despite the negative impact it had on his career as a performer. He certainly came to regret this glib dismissal of one of the great modern crises of the gay community, later making donations to an aids charity.

The essential point here is really quite interesting. For all of his popularity, New York Crisp was really an anachronism, a man from a former age. Gay politics and gay living had moved beyond what he had to offer; himself and only himself. Indeed, the only hostility shown towards him, hostility with potential overtones of violence, was in a gay bar in Manhattan, full of odd pseudo-construction types known as ‘clones’, where he was desperately out of place.

Made for TV, this is far from being a great movie though it does give an enjoyable insight into the later life of a skilled showman and aphorist, a kind of second-class Oscar Wilde, at once glibly clever and patently shallow. John Hurt was excellent in the part, a straight actor who seems to capture his gay model perfectly, in manner and appearance!