Churchill as a Historian 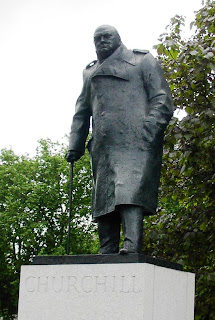 Winston Churchill was arguably the last truly great historian in the old Whig tradition, and as such he is far more entertaining than the likes of T. B. Macaulay and others of his kin. As one would expect, his books are beautifully written, with all of the wit and literary flashes of his great speeches. They are also rich, it has to be said, in the same forms of hyperbole and declamation. I read A History of the English Speaking Peoples when I was in my early teens, and was thrilled, not so much by the history as by the prose and the power of his imagination.

So, was Churchill a great historian, as well as a great war leader? No, he was not. The work is too narrowly conceived, too partisan and too prone to dubious and superficial judgements. Above all, it is simply too old-fashioned, with its focus on kings, great men (almost exclusively so) and battles. No historian would now draw on Churchill as a source or an inspiration.

Will he last? Well, as long as people read Macaulay they will read Churchill, though I personally do not believe he will be as enduring as Edward Gibbon, one of his own literary influences. But he will endure, I think, for less obvious reasons. His writing might be said to have become a historical document, a source, if you will, in its own right, insofar as it reveals a considerable amount about the attitudes and outlook of a man of the late imperial age. Viewed in this way he may tell future historians about a perspective of the twentieth century, in much the same fashion as Thomas Carlyle does about the nineteenth.
Posted by Anastasia F-B at 15:40