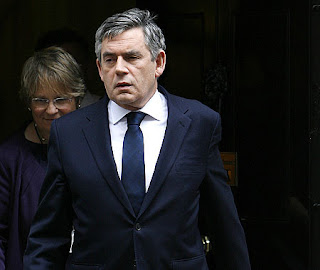 If the intention of the Chilcot Inquiry into the Iraq War is to pin Blair like a butterfly in a case it’s not going to happen. Far less stupid that Alistair Campbell, his dog, I can predict exactly how he will perform: there will general expressions of contrition over dodgy dossiers and post-war Iraq, followed by a rapid occupation of the moral high ground- yes, removing Saddam was the ‘right thing’ to do, the sort of strategy that he pursued at the 2004 Labour Party Conference.

But we have another target that makes the exercise a little less threadbare. We have the Prime Minister, Dismal Gordon himself, who is scheduled to appear – joy of joys – before the General Election. It’s not Blair anymore; for me Brown is the real target. He is only appearing because he was taunted by Nick Clegg that he had something to hide. But now, anxious to prove the contrary, we will all be able to see - potential Labour voters will be able to see - that he does indeed have something to hide – himself.

We know from the evidence given by Campbell that Brown was closely involved in the decision to go to war, though this is a matter that he has never been confronted with in public. Jack Straw, in his shifty and self-regarding way, told the Inquiry that he could have ‘stopped the war’ by resigning as foreign secretary. It that was true of him then it was even truer of Brown, as Andrew Rawnsley said in The Observer. But he did something at the time that is entirely typical of his character and style of leadership: as a member of the cabinet he supported the war while having it put about by his toadies that he had ‘reservations.’ The key to this man, the key to our dear leader’s character is simple enough: when things get tough he gets lost.

If you opposed the war, then Brown is the man who wrote enough cheques that allowed it to happen. If you supported the war, but despaired of the aftermath, he was the man who did not write enough cheques; he was the man responsible for the fact that our army was under-resourced, not properly equipped for the task, the impossible task, which it faced. He is doubly culpable, therefore, an indictment that surely extends also to Afghanistan. Iraq may have been Blair’s War but it was Brown’s Disaster.

In the early years of the Second World War a book was published entitled Guilty Men under the pseudonym of ‘Cato.’ I’m sure some people will be familiar with this famous text but for those who are not it was an indictment of the policy of appeasement in which fifteen individuals are censured, from Neville Chamberlain downwards. It was a devastatingly effective polemic. We now have enough solid material for a new Guilty Men. Now, there’s a thought. :-))
Posted by Anastasia F-B at 16:10