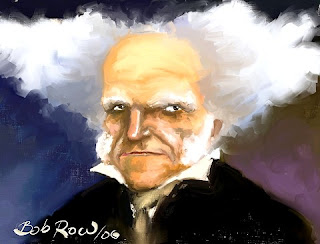 I think it is not all that meaningful to look for separate Buddhist and Hindu influences in the thinking of Arthur Schopenhauer, but to to look at overlapping sources, like the Upanishads, the Vedas and the teachings of the Mahayana branch of Buddhism in particular.

The chief link here, the chief point of contact, is the illusory nature of the world of perception, a world of the ephemeral, contrasting with a more deeply rooted truth. There is a common emphasis in both systems of belief, moreover, on notions of 'release' or 'liberation' from the bonds of the ego, from all material desire. The escape from existence is the escape from suffering. Schopenhauer specifically relates his own doctrine of the denial of the will with the Buddhist notion of Nirvana-"Denial, abolition, turning of the will, is also the abolition and the vanishing of the world, its mirror"; for the world is no more than "the self-knowledge of the will."

Philosophy has reached its limits and nothing but mysticism remains.
Posted by Anastasia F-B at 15:49