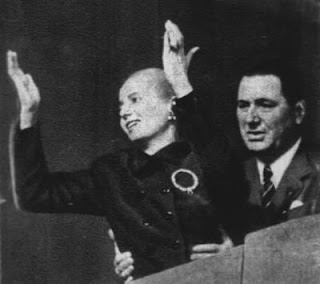 There were two essential elements to Perónist propaganda; first, the usual thing that one most associates with this activity: posters, speeches, publications and promotions of all kinds; and second, the practical work carried out by Eva Peron, the President's wife, in the Eva Perón Foundation, the charity she founded and managed, even at a micro-level. It would be difficult to underestimate the impact of this, and the personal contact it afforded many people with Evita, which was to sanctify her, both living and dead, and, for a time, shore up the authoritarian regime established by her husband. Her work in promoting Perón was also furthered by the establishment of the Female Peronist Party, shortly after women gained the vote in Argentina in 1947. Faithful cadres were sent across the country, everywhere promoting the Perónist message. It was a highly effective, election-winning machine.

Apart from party publications promoting the actions, and more important, pushing the image of the President and his movie-star wife, the normal press channels were also subject to a high degree of control and co-ordination. Opposition newspapers were intimidated into acquiescence, or closed down altogether, as was La Prensa in 1951. Evita also bought her own paper, Democracia, which presented news in an attractive, photo-rich and Perónist light. Radio broadcasts also served the same purpose. Official publications, like The Argentine Nation: Just, Free, Sovereign, were essentially photo opportunities, punctuated by text celebrating the regime's achievements. Others catered for the growing personality cult, with titles like How PERÓN gets it done, A Happy People Acclaims Perón , The Social Mystique of Eva Perón, so on and so forth.

But the most significant work of all was that carried out among school children, which included the publication of school books and stories like Little Cachito. In this an eight-year-old boy who comes from a family too poor to afford to buy Christmas presents but eventually gets a football thanks to the generosity of Evita and her foundation, which ensures that all the children of Argentina receive gifts, and no-one is left in tears! Children learned to read by pronouncing the names of Evita and Perón. After Evita's death in the summer of 1952 the following little prayer was included in the second-year reader;

Little Mother, who art in heaven, good fairy smiling among the angels, Evita: I promise to be as good as you could wish, respecting God, loving my country, loving General Perón, studying and being in every way the child of your dreams; healthy, happy, educated and clean-hearted. Looking at your portrait, like one who swears an oath, I make this promise to you. Even more, I ask you: have confidence in your child, Evita!

It was in this area that the work of Perónist propaganda had its greatest impact, outlasting the overthrow of the regime by the military in the 1955 coup. By the 1960s the regime was under sustained attack from radical youth, from the very people who had grown up with the image of Saint Evita and the omnipotent General Juan
Posted by Anastasia F-B at 16:06