Losing the Mandate of Heavem 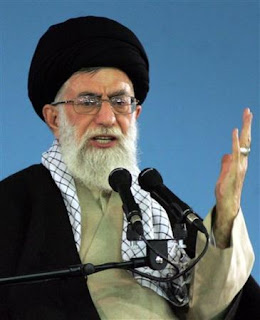 All is not well in the Islamic Republic of Iran. The opposition to the outcome of last June’s fraudulent presidential election is proving far more obdurate than the regime can ever have anticipated. Despite months of crackdowns, arrests and trails in kangaroo courts, the violent demonstrations against Ahmadinejad in late December shows if anything that resistance is deepening.

It’s no longer a question of hostility to the outcome of the election; the Islamic republic itself is now under examination. Criticism has moved from the president to Ayatollah Ali Khamenei, the supreme leader, the face, and the beard, of the clerical tyranny.

The authorities continue to blame foreign powers, anyone but themselves, for the unrest, but with Iran effectively isolated from the rest of the world this is beginning to look increasingly transparent. The signs of opposition are everywhere. Starting at the end of last week the Iranian central bank is refusing to accept notes defaced by extra words. But there are so many of these that it has been estimated that millions of bank notes will have to be taken out of circulation.

There are other transparencies. Previously Khamenei had been able to exercise power and authority out of the sight of both domestic and international opinion, pulling the strings of that grinning buffoon, Ahmadinejad, who was never more than a public front. But the old cleric’s intransigence has brought his role into ever sharper focus. He has even alienated moderate conservatives by his refusal to countenance concessions in the name of national unity. The slogan ‘Death to Kahmenei’, unthinkable only a few months ago, is now increasingly common in the streets of Teheran.

One official government rally called for Hosein Musavi, the likely winner of last June’s election, and his supporters to be executed as the ‘enemies of God,’ a step the Grand Ayatollah is unlikely to take for fear of creating martyrs. Still, the notion of a ‘just ruler’ empowered by divine grace, one that the office of Grand Ayatollah supposedly represents, seems to be dying by painful degrees. The Islamic Republic, it would seem, has lost the mandate of heaven.
Posted by Anastasia F-B at 17:10