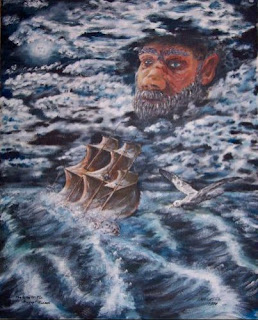 A Shropshire writer has discovered the real Ancient Mariner in what must count as a first class piece of historical detective work! Robert Fowke’s findings are now published in The Real Ancient Mariner. The mariner himself, the man who inspired Samuel Taylor Coleridge to write one of the most memorable poems in the English language, vivid in word and image, was Simon Hatley, born in Woodstock in Oxfordshire.

Coleridge is thought to have come up with the idea for the poem about a sailor who is becalmed at sea after shooting an albatross in 1797 while walking with William Wordsworth in the hills above his home in Nether Stowey, Somerset. Fowke says;

Scholars have always known what gave Coleridge the idea for the poem because Wordsworth said they had talked together about a book by Captain George Shevelocke during their walk, but nobody has ever taken up the story.

It seems such an incredible oversight, that over the years nobody has seen fit to take up this lead. But there it is, in A Voyage round the World by way of the Great South Sea written by Captain George Shevelocke and published in 1726. Sailing in the Speedwell around Cape Horn, Captain Shevelocke logs the following incident:

We observed that we had not had the sight of one fish of any kind since we came into the southward of the streights of le Maire, nor one sea-bird except a disconsolate black Albatross, who accompanied us several days, hovering above us as if he had lost himself, till Hatley, my second Captain, observing in one of his melancholy fits, that the bird which was always hovering near us, imagined, from his colour, that it might be some ill omen…he after some fruitless attempts at length shot the Albatross, not doubting (perhaps) that we should have a fair wind after it…

Fowke, tracing Hatley through some other contemporary sources has pieced together a remarkable picture. At one point he was lost at sea and rescued by a Spanish ship which took him to Lima in what is now Peru. There he was tortured, possibly by the Inquisition, the author surmised, so off he went to Madrid to check the records. He found reference to one Simon Hatley born in ‘Yudstock’ which he took to be Woodstock. Now back in England, he discovered an entry in the register for Simon Hatley born in the parish in 1685.

Interest in Haley goes beyond the albatross incident, for there are other remarkable incidents in his life. Amazingly, as Fowke has discovered, on another voyage he sailed with Alexander Selkirk, whose story inspired Daniel Defoe to write Robinson Crusoe, and with William Dampier, an adventurer and author whose work inspired Jonathan Swift to write Gulliver’s Travels. A fascinating life; a fascinating story.