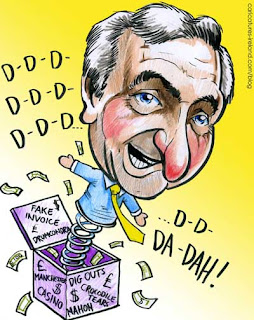 I had a really good laugh over my cornflakes yesterday morning reading a piece in the latest issue of Prospect by Colin Murphy, a Dublin-based journalist. It concerns the use of ‘mental reservations’ in the Emerald Isle, which, without mental reservation, would be described as hypocrisy by people elsewhere.

Murphy supports his article with some amusing political anecdotes. In 1927 Eamon de Valera entered the Irish Parliament after taking the oath to the crown, a major step considering his position during the Irish Civil War and his previous refusal to take an oath to a British king. He was later to deny that he had ever taken it, claiming that he signed as if he was giving his autograph!

But on the scales of self-deception that counts for nothing compared with Bertie Ahern’s acrobatics. In 1997 he denounced Charles Haughey, his former boss, for taking payments from businessmen, saying that he “could not condone senior politicians seeking or receiving from a single donor large sums of money”.

Ahern, then Taoiseach, seems to have had a slight memory lapse here, for in 1993 and 1994 he himself had received some 39,000 punts in gifts from associates. When the story emerged in 2006 he claimed that the payments were to help him through a ‘bad period’ following the break up of his marriage, which, as Murphy says, had happened some six years prior to the payments. That must have been one hell of a bad patch! When questioned two years later about further payments he claimed these were ‘winnings’ on the horses.
:-))

To accuse an opponent of ‘hypocrisy’ is one of the terms disallowed by the Irish Parliament. This came up after a debate in December when Paul Gogarty, a Green deputy, apologised in advance for using “unparliamentary language” just prior to shouting “fuck you” at a member on the opposite benches. Amazingly –and I do stress that I’m taking Murphy’s word on this –‘fuck you’ is not unparliamentary language in Dublin, though ‘brat’, ‘buffoon’, ‘corner boy’ (corner boy?), ‘coward’, ‘fascist’ and ‘guttersnipe’ are, along with hypocrite. So if a cowardly fascist corner boy ever enters Parliament he or she will have some built in protection!