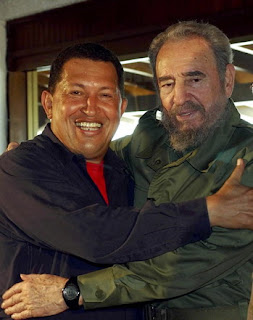 I reported recently that Hugo Chávez, Venezuela’s Sawdust Caesar, now considers himself to be a Marxist. So, having taken that path he is seeking ever more guidance from the Cubans, who are sending ‘aids’ to the country in ever increasing numbers. Earlier this month Ramiro Valdés, who ranks number three in the Castro government hierarchy, arrived Caracas, where he is expected to remain for some time. At home Valdés served twice as interior minister and has a particular expertise in policing the internet, so the Venezuelans have a fair idea what they might expect.

Cubans are to be seen in all areas of Venezuelan life, running the ports telecommunications, transport service, police training, the issuing of identity documents and the business registry. It’s so bad that the health ministry is unable to provide primary care data because the information is sent to Havana It’s so bad Chávez himself only learnt that thousands of primary health care posts had been shut down when he was told by Castro!

And what can ordinary Venezuelans expect from this ‘fraternal’ aid, this creeping Anschluss? Well, not much, if the experience of the workers in the oil industry is any measure. Trade unionists have complained of ill-treatment at the hands of the Cubans. Indeed, unions are not even allowed on Cuban-run sites, which must count as one of communisms more peculiar ironies. Last year Froilan Barrios, of the Confederation of Venezuelan Workers, said that the oil and petrochemical industry had been completely penetrated by G2, the Cuban intelligence service. Workers planning a strike were threatened by Cuban thugs.

The history of Eastern Europe in the immediate post-war years provides a useful roadmap for the present Venezuelan experiences. After 1945 communists effectively ate away at the national independence of places like Czechoslovakia and Poland from the inside by obtaining control of key ministries, like the interior and defence. Exactly the same thing is now happening in Venezuela, with Cuban ‘advisors’ closely involved in implementing new policies for the police force and the army.

These of course are all matters pleasing to the Castro dictatorship which is likely to get control of more and more of Venezuelan oil wealth to shore up their crumbling economy, an economy ruined by communism. Chávez, who has not the wit or the intelligence to understand that his country’s integrity and independence is being undermined, is set to become Mussolini to Castro’s Hitler.

When he was in Havana in 2005 he was told by Castro that their two countries now constituted a single-entity. “We are Venecubans”, he said. The only problem is that nobody thought to seek the approval of the people of Venezuela for this remarkable change in their fortunes. In a recent poll no fewer that 85% said that they did not want their country to become like Cuba. No wonder; for as bad as things are in Caracas they are considerably worse in Havana.
Posted by Anastasia F-B at 16:38