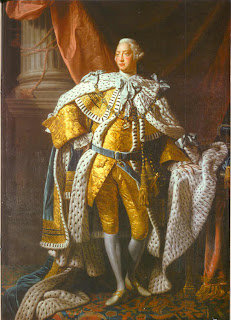 A new archive of letters was discovered recently which illustrate how much personal responsibility George III bears for the loss of the American colonies. What they show in particular is the communication gap, with a king and an administration hopelessly out of touch with events in America; a king whose optimism contrasts sharply with the pessimism of the commanders on the ground.

The collection, which goes on sale at Sotheby’s in New York in a series of auctions beginning in April, indicate that the commanders began to despair of victory almost as soon as the conflict began in 1775. A letter by General John Burgoyne, written in Boston on 25 June, 1775, is the earliest assessment of how bad things were. The British position is described as

…a crisis that my little reading in history cannot parallel…such a pittance of troops as Great Britain and Ireland can supply will only serve to protract the war, to incur fruitless expense and to insure disappointment.

It was not just the pittance of troops that was a problem; it was also the kind of troops that the crown possessed. In the previous wars with the French for the control o the Continent the British had relied on the support of colonial militias, who knew the country and could make the most effective use of the terrain; skirmishers, who knew how to use hit and run tactics and fighting skills learned from the natives. On occasions these highly mobile forces were to prove superior to conventional armies, tied to roads and dependent on supply columns, as Burgoyne was to find to his own cost at Saratoga.

The collection also includes a copy of George III’s proclamation of August 1775 calling for the “suppression of rebellion and sedition”, one of only twenty in existence. Other correspondence from London emphasises just how absurdly sanguine the authorities were, continually hoping that the rebels would see their error and sue for pardon. The problem is quite clear: king and cabinet obviously saw events in America as an old-fashioned rebellion, much like that of the Scottish Jacobites earlier in the century. It was nothing of the kind: it was a revolution.
Posted by Anastasia F-B at 08:01