The Worst Man for the Job 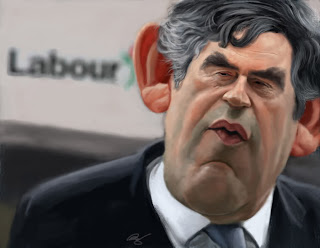 The internet guerrillas got it right; my, how they got it right: the use of the movie Downfall as an amusing comment on the decline of the Brown Reich was just so appropriate. There he is, the carpet-chewing, bullying, ranting Fuehrer, terrorising his staff with his unpredictable outbursts; paranoid, fearful, in a state of constant denial.

I don’t think I’ve ever read The Observer so thoroughly; there was just so much meat, so much to feast on. I’m really looking forward to reading Andrew Rawnsley’s The End of the Party, extracts from which, explosive extracts, appeared on Sunday. And explosive really is the operative word.

Yes, it is a personalisation of politics; it is an intense scrutiny on Brown’s capacity, incapacity, rather, for the leadership of this country. Did he not invite this scrutiny himself? I am the best man for the job, he said, this is no time for a novice; this is the time for me.

I suppose some of you read the extracts published yesterday, or picked up on the gist of them here, or from television reports. For those who have not they are altogether stunning. Our Prime Minister’s abusive conduct towards staff at all levels, including quite junior staff like typists, was so bad that he was effectively ‘reprimanded’ by Sir Gus O’Donnell, the cabinet secretary, who told him this was no way to get things done. I saw Brown with that mad misplaced grin being interviewed on television news last night, trying to deny the story, a story of missiles and moods, of effing and blinding and things that go bump in the night.

I’m not going to give a blow by blow account; a few examples will suffice. People were frightened of him because he was always shouting, constantly blaming others when things went wrong. Objects were thrown at people, anything from mobile phones to coke cans. One civil servant applying for a position in Number 10 was asked at the interview if he could cope with “extreme verbal abuse”. The poor man was so scared by the description of what working with Dismal Gordon was like that he simply withdrew his application.

While travelling in his official car Brown was told news that made in clench his fist and swing it back, The aid beside him cowered, fearing he was about to be hit in the face. Instead the fist crashed into the passenger seat in front. He hit the upholstery so regularly that sitting in front of him was considered one of the worst duties among the accompanying protection squad.

It goes on like this. There are also tales of plots and intrigues, including one involving Jack Straw, which would not have been out of place in the Byzantine court. Oh, they could plot and intrigue alright but not one of them had the courage to act in a way that might have saved themselves, their party and this benighted government.

Rawnsley has based his book on extensive research, on thousands of interviews with some of the principle figures of New Labour over the years. Some five hundred people contributed specifically to the book itself. But he has been careful not to let animosity and hatred-and there is so much of that- speak for itself. He only included incidents of abusive behaviour, he says in an accompanying article, once he had attained confirmation from impeccable sources. Some episodes, though carrying a high degree of verisimilitude, were excluded because the proof was not cast iron –“Only once I was satisfied by the veracity of the story did it go into the book. The sources are 24 carat.”

I’m not going to say that this is a shocking story because I am no longer shocked by anything that happens in British politics. Even so, it’s sad to see the senior political office in the land degenerate in such a way; for power to devolve on a man such as this, a man who has neither the capacity nor the temperament for leadership; a individual who is so clearly the worst man for the job.

How are the mighty fallen in the midst of the battle! O Jonathan, thou wast slain in thine high places