Fighting for the Falklands 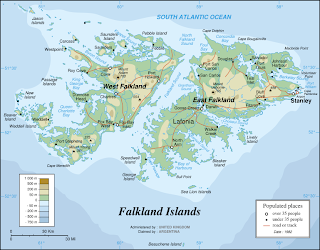 It's an historical oddity that the Falkland Islands, remote, wind-swept, with little strategic importance and no mineral wealth, have taken England to the threshold-and over the threshold-of war some five times; with Spain, with France and with Argentina. In fact it was the 1770 'crisis in a tea cup' that begins the whole sequence.

English sailors first caught sight of the Falklands in the late sixteenth century. In the following century the government was to make a half-hearted claim, though under the Treaty of Tordesillas they fell within the Spanish orbit. It was only in 1748, with the report of Admiral Lord Anson, that London began to give the matter its serious attention, sounding out the Spanish on the question of sovereignty. This only had the effect of drawing up the battle lines, though the matter was put to one side for the time being. An uncertain equilibrium might have remained but for the unexpected intervention of a third party-France.

After the conclusion of the Seven Years War, the French, attempting to improve their position in the South Atlantic, landed in the Falklands, establishing a base at St. Louis, now Port Stanley. At the same time, the one unbeknown to the other, the British made their own landing at Port Egmont in the west. Responding to Spanish objections, the French handed over Port Louis, now renamed as Port Soledad, though neither party was as yet aware of the proximity of the English, until a chance sighting of some ships in December 1769. And now we have a little overture to what was to come just over two hundred years later.

In June 1770 the Spanish governor of Buenos Aires sent five frigates to Port Egmont, landing some 1600 marines. The small British force present promptly surrendered. When Parliament assembled in November, the MPs, outraged by this insult to national honour, demanded action from the government. The Spanish attempted to strengthen their position by winning the support of France, invoking the Pacte de Famille between the two Bourbon crowns. For a time it looked as if all three countries were about to go to war, especially as the Duc de Choiseul, the French minister or war and foreign affairs, was in a militant mood. But Louis XV took fright, telling Charles III that "My minister wishes for war, but I do not." Choiseul was dismissed from office, and without French support the Spanish were obliged to seek a compromise with the British.

In January 1771 the British were allowed to restore the base at Port Egmont, although the whole question of sovereignty was simply sidestepped, a source of future trouble. The best verdict on the little fracas was passed by Samuel Johnson in his pamphlet Thoughts on the late Transactions Respecting Falkland's Island, looking at the British problem in holding such remote islands against a hostile mainland, "...a colony that could never become independent, for it could never be able to maintain itself." And so it remains today.
Posted by Anastasia F-B at 16:24